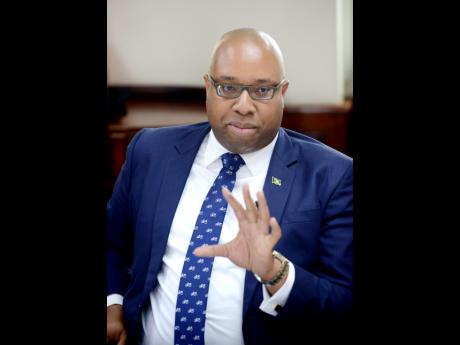 While concerns have been raised about the nearly $9 million in travel expenditure for Delano Seiveright, senior communications strategist in the Ministry of Tourism, for a 15-month period spanning February 2017 to May 2018, the man at the centre of the debate has indicated that it was value for money.

Wykeham McNeill, chairman of Parliament's Public Administration and Appropriation's Committee (PAAC), yesterday asked his colleagues whether they had any concerns about the $8.9 million in travelling expenses racked up by Seiveright .

The committee had previously requested details of Seiveright's emoluments and travelling expenses, and these were provided by the tourism ministry yesterday. During the deliberations, Leslie Campbell, government member of Parliament, questioned whether McNeill was attempting to thwart the rules of the committee

by introducing discussion on Seiveright's travelling expenses. Campbell said that he needed more time to review the document.

However, as the committee chairman sought to direct discussion on the communication strategist's travel expenses, the discussions descended into chaos, with members shouting at each other.

In a post on Facebook yesterday, Seiveright  described McNeill's actions as chairman of the PAAC as "not only unprecedented and disgraceful, but represent a gross abuse of his power". Seiveright also charged that McNeill was using his chairmanship of the PAAC to "distract from the world-leading performance of Jamaica's tourism ministry and its agencies".

He said that the ministry and its agencies took part in extensive and "tiring travelling as the business is overseas".

"The result of engagements by me and other ministry and agency officials has assisted in the best performance of Jamaica's tourism sector on record. We brought 500,000 more tourists to Jamaica's shores in 2017 over 2016 - that's just one year - totalling 4.3 million tourists.

"This is as many as, or exceeds, what McNeill delivered in his four years in office from 2012 to early 2016 as minister - a really lacklustre performance in a generally great global economic environment," Seiveright  charged.