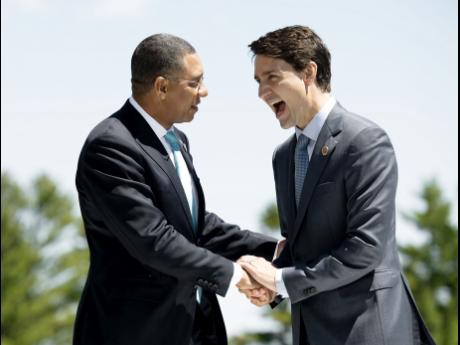 Prime Minister Andrew Holness used his first opportunity to address a gathering of some of the world's most powerful leaders to underscore the threats faced by Jamaica and other small island developing states (SIDS) in the region from natural disasters.

Addressing the G7 Summit Outreach Session in Quebec, Canada, yesterday, Holness noted that countries in the region face challenges with growth and high debt, which have constrained their ability to effectively and sustainably exploit the vast resources and potential that exist in their surrounding oceans and seas.

He noted that regional states have also not been able to effectively respond to the threats emanating from their oceans and seas, such as rising sea levels, and the stronger hurricanes carried over ever-warming waters.

"SIDS, like the countries of the Caribbean, need to be empowered to take charge of their development and prosperity, through economic growth rather than debt, while being good stewards of our environment," said Holness.

"This will undoubtedly require enlightened thinking and partnerships, as already recognised by every country which has signed on to Agenda 2030," added Holness.

He told the world leaders that building resilience was not optional for regional states as this is an imperative for their survival. But he argued that, "Creative and innovative solutions must be found to design appropriate risk mitigation, risk transfer and risk-financing tools while ensuring wide participation in solutions."

Holness added that Jamaica and other SIDS need cooperation and partnerships with countries like the G7 to address some of the challenges.

Among the challenges identified by Holness were high public debt and the lack of fiscal space to invest in climate change adaptation measures, and the classification of many SIDS as upper middle income states (according to their gross national income), which impacts their eligibility to access certain sources of funding primarily in the reconstruction and recovery phase of the disaster management cycle.

"Ultimately, our answers could lie in partnerships with countries like the G7, through trade and investment and technology transfers, as well as creative solutions to debt and risk, which support economic growth.

"It is ultimately sustainable growth which will empower us to ensure prosperity for our people, while taking care of our oceans and seas and land environment," declared Holness.