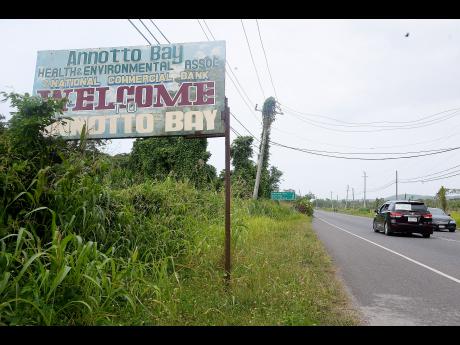 Lionel Rookwood
A sign welcoming persons to Annotto Bay, which is now the most feared area in St Mary. 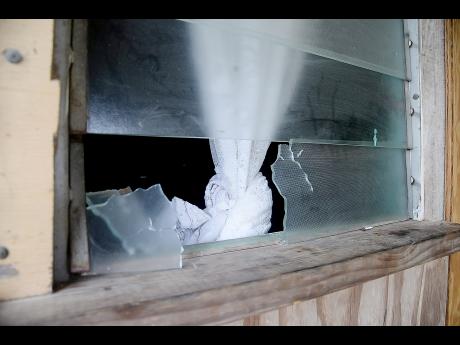 When The Sunday Gleaner visited the community in Fort George last Wednesday, a cowardly dog and two fowls seemed to be the only occupants of the informal community which once housed some 12 families.

Residents of a neighbouring community told our news team that in the aftermath of the shooting, persons grabbed their belongings and bolted from Fort George, leaving behind unmade beds, open doors and shattered glass windows.

They said a group of gunmen invaded the area and fired several shots on three of the board houses before making their escape.

When the shooting ended, one woman was found with gunshot wounds to the foot, while a man was found shot in the head and arm. He remains in hospital in serious condition.

The residents of the neighbouring community said the gunmen were in search of a man involved in the gang war in the area, but he was not at home at the time.

According to the residents, while the guns were not turned on them, they are traumatised as the shooting sounded as if it would never end.

"Honestly, mi never expect to hear that people live out that. The girl foot mash up, and right now we just a wait on the youth to see if him can come out. Him work with we out here and him never involved in anything," said a mechanic in the community.

The residents allege that the present bloodletting has its roots in the chopping of a man late last year, but the police could not confirm this. Instead the cops pointed to the recent arrest of suspected gangster Charles 'Tuggy Tuggy' Hamilton, who was on their most wanted list.

They said in his absence his cronies have increased their criminal activities in an attempt to increase their clout and gain control of turf.

Two weeks ago, gunmen struck twice in less than 24 hours apart in Annotto Bay, killing Okeive Wilson and Travae Ellis, who police said have been linked to the ongoing gang feud.

According to the cops, the informal communities in St Mary are feeding the crime.

"Annotto Bay is a very depressed community. If you go behind the main street there are a lot of zinc fence communities. Most of the basic amenities are not in the space and the area is greatly lacking social intervention," said head of the St Mary Police Division, Superintendent Bobette Morgan.

She described the informal settlements in the parish as breeding grounds for unemployment and crime in the parish.

She said members of the Police Safety and Security Branch have been trying their hardest to reach the residents of these communities.

With a population of just over 113,000, St Mary has recorded 19 murders since the start of this year, with at least 10 of the killings linked to domestic violence, particularly in the informal settlements.

According to Morgan, at least six of the killings have been tied to a gang feud in Annotto Bay that has left the entire parish fearful.

This was confirmed by several residents, who told our news team that they are worried the violence in Annotto Bay could spread elsewhere.

"Even the pickney dem fraid. I have two nieces and two nephews that go to Annotto Bay Primary and both of them fraid. They are asking me to follow them go to school because is pure gunshots firing down there.

"Six o'clock down there empty like ghost town," said a bar operator in Martin Village in the parish.

"It is much easier for me to go buy me goods in Annotto Bay than anywhere else, but I am not setting foot down there. We need a state of emergency for Annotto Bay alone," she added.

She was supported by several women in Albany, who described Annotto Bay as a no-go zone.

"Everywhere else is good in the parish, it is just them (in Annotto Bay) making it look bad," declared Richard Edwards of Colour Rain.