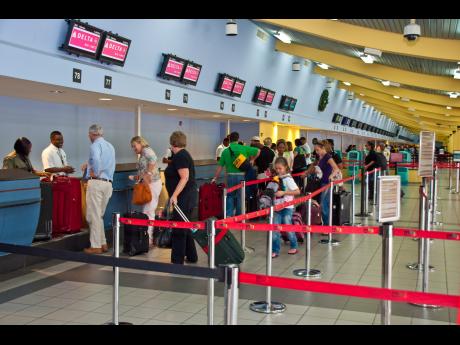 Travellers checking in at the Sangster International Airport.

As of June 30, passengers travelling through Jamaica's international airports, Sangster and Norman Manley, will not be allowed to carry powdered products weighing more than 12 ounces in their carry-on luggage on entering the United States of America (USA).

The ban, announced by the Transportation Security Administration (TSA), will negatively impact duty-free concessionaires who specialise in selling spices and coffee as some passengers will not be able to board flights with these products.

"Any container in excess of 12 ounces, such as coffee, spices [will be affected]; the only thing that may not be affected is baby feed," said Yvonne Pearson, president of the Board of Airline Representatives of Jamaica.

One pound of coffee is equivalent 16 ounces.

She said her organisation is alerting persons at the check-in counter so they have an option of placing powdered products in their checked luggage.

"If persons are found with containers over the 12 ounces at the gate checkpoint, we cannot take it in the cabin," said Pearson.

Already passengers entering the US are banned from carrying liquid and gels weighing more than three ounces. These measures were put in place after the 9/11 terrorist attacks in the US.

This latest move was spurred by an incident in Australia a few months ago, where powdered substance was involved in a potential terrorist threat. According to reports, the TSA was implementing the ban as a precautionary measure.

Checks by The Gleaner with director general of the Jamaica Civil Aviation Authority (JCAA), Nari Williams-Singh, revealed that his organisation facilitated the meetings with stakeholders after receiving the TSA directive. However, he was quick to point out that he could not speak to how the new rules would affect sales of products such as spices and coffee in the airports.

"The TSA has put out a directive to the airlines; they can choose how they will comply," he noted, adding that the Ministry of National Security was also aware of the stipulation.

Passengers travelling to Europe, Canada and Caribbean countries should not be affected by the ban, the BARJ president acknowledged.

Pearson recommended that passengers check with their respective airlines once they were flying to the USA.