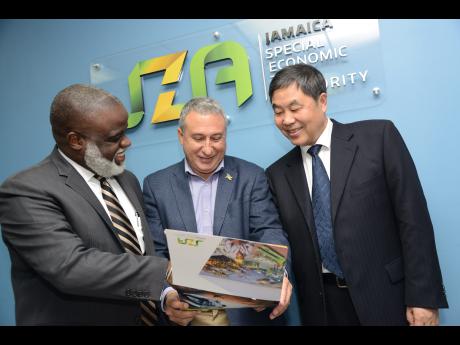 Rudolph Brown
From left: Dr Eric Deans, CEO of the Jamaica Special Economic Zone Authority (JSEZA); Metry Seaga, deputy chairman of JAMPRO and Chen Chunming, chairman of Jiuquan Iron and Steel (Group) Company (JISCO), review plans for the development of the Jamaica-Gansu Industrial Park. They were attending JSEZA's press conference to update the public on Jamaica positioning itself as a logistics hub at the authority's Waterloo Road offices in St Andrew yesterday.

Some 20,000 jobs are expected to be generated in five years from the US$3-4 billion Jamaica-Gansu Industrial Park to be constructed in Nain, St Elizabeth, by the state-owned Chinese Jiuquan Iron & Steel (Group) Co Ltd (JISCO).

A further 80,000 jobs are projected when the com-prehensive industrial complex is completed by 2035. The facility will focus on the processing and manufacturing of goods to be exported to markets in the Americas and the Caribbean. Modern logistics, international trade, research and development, professional services, and urban support are the other major concepts associated with the industrial park.

"They are going to build an entire development, which is going to consist of the bauxite plant (ALPART), an electricity plant to run that bauxite plant, and other businesses that they develop. They're going to develop a smelter," disclosed Jamaica Special Economic Zone Authority (JSEZA) Chairman Metry Seaga during a press conference at its Waterloo Road offices in St Andrew yesterday.

"We're going to stop doing what we have done for 50 years, which is digging up the red dirt and sending it away. Finally, we're going to be able to add value to our natural resource of bauxite, and we're going to take it to an end product," he explained.

"After so many years of preaching this as the president of the Jamaica Manufacturers' Association, I am able to say that I see a bright future for manufacturing in a development like this. I think it is critical and important that we, as Jamaicans, understand the game-changer that this is going to be," Seaga added.

In addition to aluminum oxide and aluminum processing, the focus industries include limestone processing, machinery and light, new energy, as well as agricultural and aquatic product processing.

Construction of the start-up area of the park, occupying 27 square kilometres, will begin in 2019 and is estimated to be completed by 2023. Subsequent development will mainly include construction of remaining infrastructure, residential and commercial land, which is slated for completion by 2035.

"This is going to transform not only St Elizabeth, but all the towns around it, and this is going to happen if we (JSEZA), the Government, and, most importantly, the people of Jamaica, rally around this and insist that it happens," Seaga reasoned.

"It is important because the government of China does not make idle promises. This is not another pipe dream. This is real and we're going to make it happen, but we need the support of everyone," he contended.