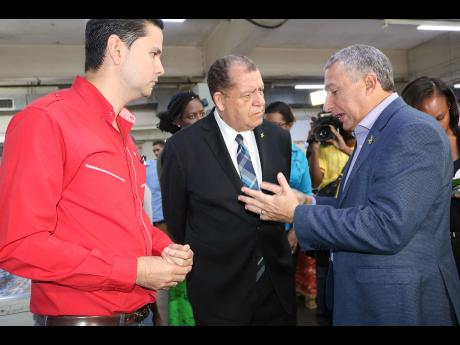 Christopher Serju
Sean Duquesnay (left), managing director of Lithographic Printers Limited, listens in as Audley Shaw (centre), minister of industry, commerce, agriculture and fisheries, pays close attention to the concerns of Metry Seaga, president of the Jamaica Manufacturers' and Exporters' Association, during a tour of the company's operations at 15 East Avenue, Kingston 4, yesterday.

Minister of Industry, Commerce, Agriculture and Fisheries Audley Shaw yesterday served notice that he would be taking steps to close the trade loopholes that Jamaica's trading partners have been abusing to dump goods into the country to the detriment of the local manufacturing sector.

"What has been called the Caribbean Single Market and Economy (CSME), you know who has been the single market over the years? Jamaica," he told business operators following a tour of Lithographic Printers Limited in downtown Kingston yesterday.

The former finance minister accused Jamaica's CARICOM partners specifically of abusing the Rules of Origin guidelines, as well those relating to the Common External Tariff (CET).

"If we are to be very blunt, other countries in the region have abused the CARICOM privileges, in some cases, in extreme ways, to the disadvantage of manufacturers in Jamaica and ... at the agricultural end as well," he charged, without naming any countries.

"The CET under CARICOM arrangements requires that there is ... to be significant value that is added in the region ... . If you are importing raw materials from third markets, you are to add a minimum level of value in your member country," Shaw said. "In a lot of cases, this has not been done, and a lot of companies in the region have been abusing it and sending those products into Jamaica duty-free and benefiting from it," he noted.

"So everybody is sharpening up their edges on trade ... . The wealthiest, largest countries in the world, they are now into the mould of protecting their manufacturers. Well, don't tell me that we are too small as a country that we can't protect our manufacturers.

"So I give this undertaking, as minister, that we are going to be taking a careful, forensic look, industry by industry, product by product, to make sure that there is a level playing field. We are putting in a modicum of protection for our businesses that are investing, taking the risk and producing here in Jamaica. That is a commitment I am making to you as your minister," declared Shaw.