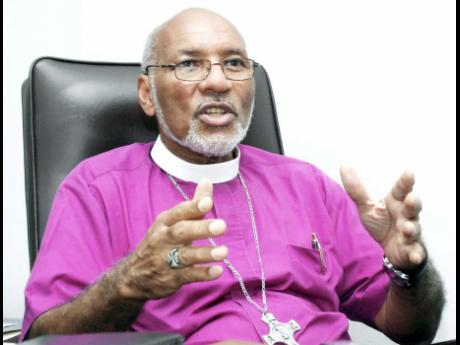 Several pastors across the island could surrender their marriage officer's licences in protest of a decision by the Registrar General's Department (RGD) to charge them $10,000 to register, plus an annual registration fee.

The pastors are also upset about an invitation by the RGD for all marriage officers to attend a training session that costs a further $15,000.

According to Gregory, attempts to get answers or a resolution have so far been met with promises to look into the matter and, at times, the lack of courtesy of a response.

"He needs to say something as to exactly what is the position of the Government in relation to what is being done in relation to marriage officers, particularly ministers, at this time," argued Gregory.

He charged that the policy was implemented without consultation with the clergy and the fee does not align with the Church's view that marriage is a sacrament.

"There has been a lot of confusion. There has been $10,000 to register, and they talk about an annual fee. It has never been clear as to what they are talking about, and that is the problem.

"Many of us don't charge for weddings, and therefore, to ask for $10,000 when some of our ministers are doing probably one or two for the year seems to be a problem," Gregory told The Gleaner yesterday.

He noted that he has been a minister of religion for more than 45 years and has never charged for a wedding.

"I stand among those who plan to surrender the marriage officer's licence when my current marriage register is full," said Gregory.

He noted that married couples have to pay a fee to the RGD to get a copy of the marriage certificate and questioned the wisdom of the current posture, given the repeated statements about the importance of a stable family life.

"To target marriages as a source of further government revenue ... seems rather short-sighted," said Gregory.

PICA SHUTS OUT CLERGY, TOO

Anglican Bishop of Jamaica and the Cayman Islands the Reverend Dr Howard Gregory is crying foul over a decision by some state agencies to remove ministers of religion as authorities to certify documents of persons doing business with them.

In an open letter to Prime Minister Andrew Holness Gregory noted that entities such as the Passport, Immigration and Citizens Agency (PICA) have taken ministers of religion off their lists of persons who qualify to certify documents and have limited them to those registered as marriage officers.

Gregory plans to surrender his marriage officer's licence and, as a consequence, will be deemed ineligible to even certify anyone for state purposes.

"Prime Minister, it would allay the anxieties and concerns of many within the ranks of the clergy. If you could speak on the issue in a public manner or at a forum to which we are privy, indicating the position of your Government on these issues as the current silence is deafening," declared Gregory.

Who can certify an application for PICA

The person certifying the application must be a citizen of Jamaica who is not a family member of the applicant and has been personally acquainted with the applicant for a period of not less than 12 months. See list below:

- Member of parliament, justice of the peace, attorney-at-law