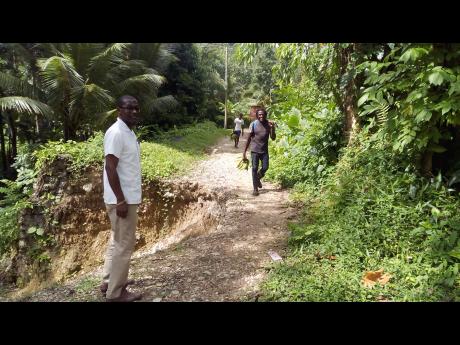 A section of the undermined roadway leading into Clear Spring, Portland.

Unless immediate attention is given to a roadway leading into the community of Clear Spring in east Portland, which is being undermined, hundreds of residents could be marooned in the event of heavy rainfall.

The farming community, which has already experienced the loss of a bridge during heavy rains in October 2015, is faced with a crisis as residents now have to walk through a riverbed to get their homes and farms. This is considered by many to be dangerous, especially during bad weather.

"No longer are we able to drive into the community, as the roadway has narrowed significantly. It is really stressful for persons living beyond this point, as no vehicle is able to pass this collapsed section," reported farmer Damion Hamilton.

"I own a vehicle. But, with the current state of the roadway, it is of no use to me. I am unable to drive on to my farm to transport produce, including banana, plantain, cucumber, pumpkin, and pineapple, to market. Other farmers are facing similar challenges," he added.

According to Hamilton, the collapsed roadway, which continues to worsen with each bout of rainfall, has forced several residents, who have expressed their frustration at the situation, to migrate elsewhere, rather than to risk living in what they have described as a death trap.

The dangerous practice by residents to walk through a nearby riverbed, especially during heavy rainfall, has triggered outcry from Member of Parliament Dr Lynvale Bloomfield.

"This section caved in almost two years ago and it is getting progressively worse. This is a high-production area for agriculture, but, with each [instance of] rainfall, the roadway is breaking apart," commented Bloomfield.

"In a short while, the walkway that is left will disappear. It is a local government issue, and I have heard that money is available. We are asking the relevant authority to step in quickly to see how best we can get this community up and running, given the fact also that construction of homes is taking place in this area," he added.

The construction of dozens of homes has been halted as delivery trucks have been unable to transport material to their destinations.