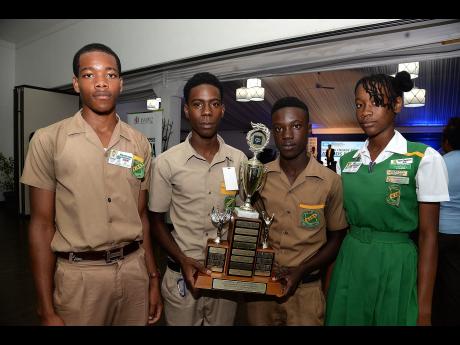 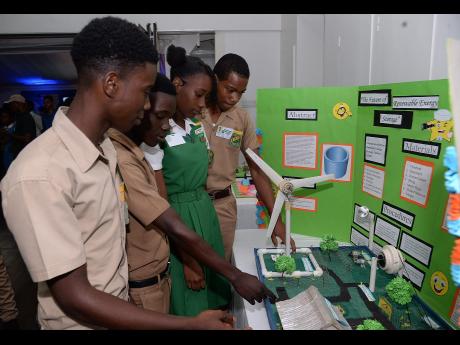 Launched in 2003, the PCJ Schools Energy Programme Competition is the corporation's major vehicle for promoting energy education among the country's youth. The programme, which engages primary and high school students from institutions across the country, aims to sensitise young persons to issues affecting the energy sector.

Winston Jones High won the 16-19 age category of the science competition, which earned them a $500,000 grant from the PCJ to implement the winning project.

The grade 10 quartet of Okelo Smith, Kadine Jordine, Shawn Clarke, and Christopher Morgan designed a model that demonstrates how a flywheel storage system can be used to supply energy to the school during short peak-demand periods.

In addition to the grant, the students were awarded individual prizes of $50,000 each.

"We went to different scrap yards to source material," related Nadine Thompson, electrical technology and electrical installation teacher at the school. "We went to the home economics lab to collect scrap material from old sewing machines and also source and scrap motors from old, damaged printers in the school, as well as collect other stuff from basic recycled material to construct the project," she told The Gleaner.

Thompson noted that when implemented, the project should reduce the schools electricity bill, which ranges between $350,000 to $400,000 monthly.

Traditionally, the competition involves an essay, science, and poster category. However, this year, a jingle contest was added to give youngsters an additional outlet for creative expression.

Energy Minister Andrew Wheatley, who was down to give the main address, was not in attendance but sent his apologies.

For the 2017-2018 academic year, the flagship initiative exposed 2,244 students from 103 schools across the island to social and economic issues as well as methods of energy production and the importance of efficiency and conservation.

This was done through seminars that featured presentations from industry professionals as well as educational tours of energy-generating facilities such as the Jamaica Public Service Company's hydro plant and wind farm and the BMR wind farm, which are all in St Elizabeth; the Wigton Windfarm in Manchester; and New Fortress Energy's regassification plant in Montego Bay.

More than $4 million in cash and prizes was awarded to 87 students at the awards ceremony.