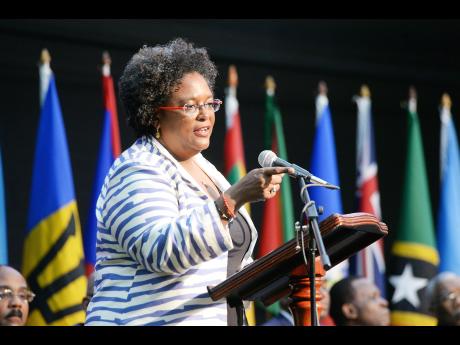 Prime Minister of Barbados Mia Mottley has warned Caribbean leaders not to make the same mistakes Britain made with Brexit. She added that neither should they forget that those who secure victory over the region do one thing: "divide and rule".

Arguing that regional integration is crucial, Mottley, who was elected prime minister just over a month ago, told her colleagues attending the 39th Regular Meeting of the Conference of Heads of Government of the Caribbean Community in Montego Bay to heed the lessons of Brexit. This refers to the decision by voters in the United Kingdom for the country to leave the European Union (EU).

She pointed to the "hundred billion-dollar divorce bill that Britain is now confronting because of the prospective loss of all the benefits of functional cooperation that were seamlessly tied to its membership of the European Union".

Making reference to the current situation of the EU's blacklisting of the Caribbean, accusing some 17 countries of being tax havens, Mottley urged her colleagues to act now in accessing financing from the region's natural resources. In this regard, she has called for the establishment of a Caribbean cruise commission to negotiate with the cruise lines that flock the region's ports.

"We cannot improve our cruise facilities with the limited financing that this current head tax offers us. Yet, we fail to bite the bullet and establish with the requisite negotiating authority a Caribbean cruise commission," Mottley stated, adding that she believed in the need for automaticity of financing.

"Whether it is through the reworking of the common external tariff or some other mechanism, CARICOM will not deliver for our Caribbean people if it does not have the finances to deliver and implement," asserted the Barbadian prime minister.