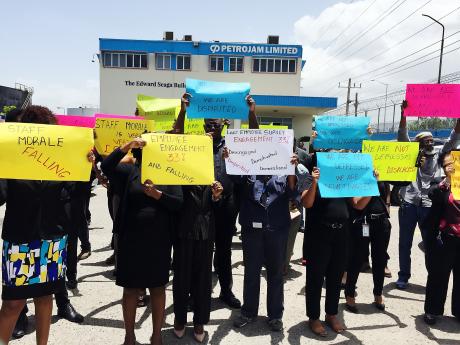 Contributed
Staff of Petrojam on Marcus Garvey Drive in St Andrew protesting in front of the state-owned oil refinery yesterday. 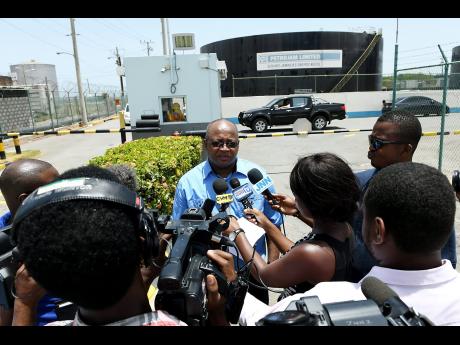 Ricardo Makyn
John Levy of UCASE addressing the media outside the entrance to Petrojam on Marcus Garvey Drive in St Andrew following a protest by staff at the state-owned oil refinery yesterday.
1
2

John Levy, general secretary for the Union of Clerical, Administrative and Supervisory Employees, has said that workers at the troubled Petrojam oil refinery are in limbo as it pertains to which minister now holds the reins of the energy portfolio following its recent relocation from the Ministry of Science and Technology to the Office of the Prime Minister.

"We want to meet with the person in charge, and honestly, right now, we are not sure who is in charge. We don't know if it's the prime minister or one of the ministers in the prime minister's office. That has not been spoken to as yet," Levy told journalists yesterday at the Marcus Garvey Drive entrance of the refinery following a protest by staff.

He said that he did not understand the fixation with a six-member board for Petrojam and suggested that it should be increased to include a worker representative, adding that the Human Resource Committee of the board should be also strengthened.

"So that is something we would want the prime minister to take into consideration," Levy said.

Yesterday, nearly 100 workers protested inside the grounds of Petrojam for just about an hour in an attempt to get the Government's attention.

"I must say that what has been happening generally and some of the comments that were made by some sector groups are unfortunate. Generally, there have been comments about corruption down here, and I am saying to everybody, please take a step back. Let the people who are properly trained do the investigations," he said.

"Let them carry out those investigations, and let the chips lay where they fall. Don't impute motive on anybody's part, even though I think that the board is not adequate," Levy stated.

Additionally, the protesters said that they were concerned that a purported survey capturing employees' engagement at the refinery was a figment of someone's imagination. Results from the purported survey showed that worker engagement stood at 65 per cent, up from 35 per cent of two years ago, but that figure is being disputed.

"The staff at Petrojam is not aware of any survey done, and, as a matter of fact, it is plain to see that [regarding] the morale of the staff, [their] motivation is even worse than that 35 per cent, without any scientific backing on my comments. The general view is that the engagement level is lower than the 35 per cent that was referenced two years ago," said Levy.

"We are aware of a survey done years ago that speaks to 35 per cent engagement. What has happened recently is that there has been a new survey that is being referenced, and the workers were not aware of survey interviews or the result of that survey that spoke to an improvement to 65 per cent," he added.

Levy said that if a survey were to be done, it would find that things have got worse. He said that the refinery's management is also not aware of the survey.