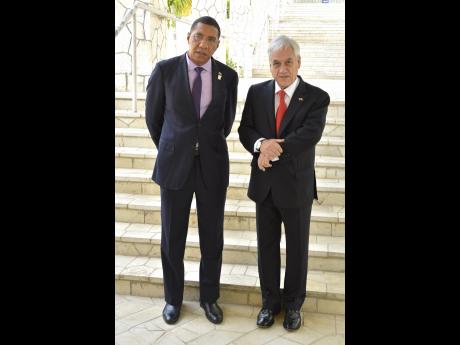 Lionel Rookwood
Sebástian Piñera (right), president of the Republic of Chile, and Prime Minister Andrew Holness leave a meeting at the 39th Regular Meeting of CARICOM Heads of Government at the Montego Bay Convention Centre, yesterday.

Chairman of the Caribbean Community (CARICOM) and Prime Minister of Jamaica Andrew Holness has encouraged Chilean President Sebasti·n PiÒera to use his country's "considerable visibility" on the international stage to assist members of the regional bloc to make a strong case for access to development financing.

Highlighting what he described as an issue of grave concern to CARICOM, Holness said that the categorisation of member states as middle-income countries denied them access to development financing based solely on the criterion of per capita income.

"There is a need for the criterion to be changed to take into consideration the economic and environmental vulnerabilities of states," Holness declared while addressing the Heads of Government of CARICOM, where PiÒera was a special guest.

The three-day conference, which was held at the Montego Bay Convention Centre in St James, ended yesterday.

"As we advocate for this change in approach by the developed countries and by the international financial institutions, we look forward to getting support for our position on this matter," Holness asserted.

Holness has consistently called on the international financial community to review its policy of graduating middle-income states from development financing by using gross domestic product as the main criterion.

Jamaica's designation as a middle-income country has disqualified it from obtaining certain kinds of development aid.