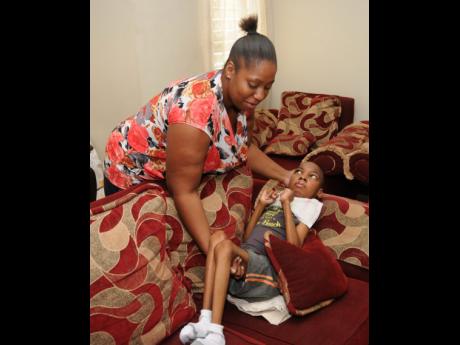 Jermaine Barnaby
In this 2016 file photo, Tajay Rowe (right) and his mother, Tasha Howell, share a tender moment at their house. 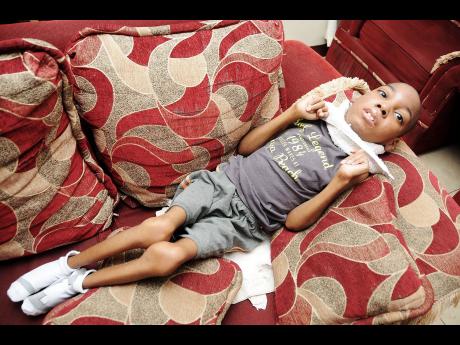 "It's cruel. It's inhumane. It's the worst thing a government can ever do to a child whose future it has ruined," said a hurting Yvonne Beckford, grandmother of Tajay Rowe, the boy who suffered brain damage during his birth to his then teenage mother, Tasha Howell, 15 years ago.

Tajay's mother and grandmother successfully sued the South East Regional Health Authority (SERHA) and the Victoria Jubilee Hospital (VJH) for damage caused by negligence on the part of the staff at the hospital.

In 2015, the court ruled that the State should pay them $26 million in damages, but almost three years later, the family has not received any of the money that is urgently needed to pay Tajay's medical bills and meet his daily needs.

According to Beckford, Tajay's seizures have increased in occurrence and intensity in recent months, and the price of the special syrup he needs is more than the family's electricity bill.

With tears flowing freely, Beckford told The Sunday Gleaner that the family has to find thousands of dollars for taxi fare to take Tajay for medical attention and oftentimes, a choice has been made to buy his medication instead of paying other bills.

Beckford said that after the judgment was handed down and the family was still not receiving any money, she wrote to their lawyer, asking what the position was.

"It was then he told me that the Government had filed an appeal," added Beckford.

She said that the State has filed six grounds of appeal, but only three are known to Beckford as the documents are missing some pages.

Efforts to get the other grounds of appeal were unsuccessful last week as the attorney who is representing the family, Alexander Williams, was unavailable to speak with our news team this time around.

Williams had previously expressed his disappointment with the Government's decision to appeal the ruling and told The Sunday Gleaner, "We would have been prepared to listen to any reasonable offer of settlement long ago, but it was never forthcoming, and they have taken the position that they are going to defend it to the end."

Among the grounds of appeal filed by the State is that the trial judge erred in fact and law in finding that the claimant had been found to have suffered brain damage, which occurred while under the management and control of the VJH when there was no evidence to support the finding.

The State is also claiming that the trial judge failed to consider whether the failure to carry out specific investigation was the cause of the claimant's brain injury, and "there is no evidence to support that omissions caused the brain damage. Alternatively, the learned trial judge failed to make definitive findings on causation ... ."

Another ground of appeal is that the judge fell in error and misdirected herself in law in the application of the doctrine of res ipsa loquitur (the principle that the mere occurrence of some types of accident is sufficient to imply negligence), which is unsupported by the evidence.

But Beckford remains convinced that the judge was correct in finding that Tajay's brain injury was the fault of the hospital.

"It was only after we had to rush the baby to Bustamante (Hospital for Children) that we knew what happened. It was there that they said, 'No more of this man. We are tired of seeing babies damaged like this at Jubilee. You need to go to court'," alleged Beckford.

The family's struggles were made worse as Tajay's father died in a car accident four months after he was born.