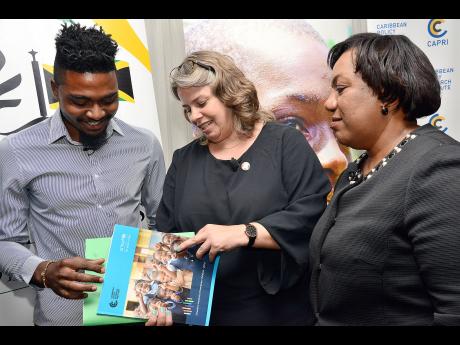 Amid a recent report released by the human rights group Jamaicans for Justice (JFJ) of more than 1,600 documented cases of critical incidents in residential childcare facilities across the island in the last 10 years, two former wards of the State last week shared their radically different experiences with The Sunday Gleaner.

For 21-year-old Lisa Williams, who transitioned out of state care less than four years ago, her time as a ward of the state was horrific, and she is still traumatised by some of the memories.

According to Lisa, following her parents' death, she was placed in state care at age 11, having been sexually abused by a relative. She said conditions in the rural Jamaica children's home were fine initially, but everything changed when older wards started targeting her.

Lisa was transferred to another institution in the Corporate Area, which she describes as "hell on Earth".

According to Lisa, she remembers that male staff members would be present in the bathrooms while girls went about their business, and on many occasions, she caught one male worker watching her while she showered. But that pales in comparison to the physical abuse she faced.

"When I was 11 or 12 years old, this girl who was about 24 took the heel of her bootee (shoes) and hit me in my head. A staff member slammed my back into a table. Other children would even squeeze my throat and fling stones at me.

"I still have cuts in my face and bruises on my body to show for it. One time I even saw this lady brutally beating a little girl with one of those big umbrellas," Lisa told The Sunday Gleaner.

She alleged that she made several reports to the manager of the facility but nothing was done as no one believed her even though evidence was present.

"I tried running away, but the older girls caught me and took me back. They even tied me down to a chair while everyone laughed at me. I tried to kill myself three times. I took pills, tried to hang myself, I even cut myself.

"The last time when I took the pills, I was taken to hospital by this kind lawyer, and I was admitted. I just wanted to die. I felt like I was being punished for something I didn't do," said Lisa.

She further charged that some staff members would use information from her file to verbally abuse her, and if she tried defending herself when she was attacked by other wards, she would be denied food as punishment.

"I would be forced to stand up and watch the others as they ate. Then they would just send me to bed hungry. You know, one time one lady even blackmailed me for a fire that happened there that I didn't even know about. She said her husband was some top policeman and she could make them lock me up," added Lisa.

"They would give me half a bun for dinner, or half of a slice of bread with a piece of franks. The drinks and tea had no taste, and they would even use two eggs, water it out and cut it up to share for all of us."

She said that she remembered an occasion when she reported to a female staff member that there was a lump in one of her breasts but was told that it was all in her head. Years later, after receiving medical attention, she was diagnosed with a fibrocystic condition.

"I hated it there. Better they had left me where I was. So many times the CDA (Child Development Agency) official came, and when they had meetings, they would take reports and promise that we would be taken in with a family, but it never happened," charged the young woman.

She told our news team that her younger family member is still in state care, and she is worried about the ills she might be experiencing there.

But for now, Lisa is happy that she is no longer in that place that she described as a prison.

It was a completely different story for the now 68-year-old, Deborah Jones*, who was a ward of the state during the 1960s, when Jamaica was a kinder, more caring country.

"I wouldn't say the treatment was bad. I learnt things down there. In the mornings, you would have your duty that you would have to do, and you would go off to school as it was on the same compound. We would go to sewing classes," said Deborah.

She said that her time spent at the facility contributed significantly to her current profession as a seamstress and insisted that she left with fond memories,

"Friday nights, we would get some music, and we danced, and whatever, in the dining area. I was involved in a play there as well. I would get to go to festivals, and I took part in dances. I don't know about now still because that was a long time ago," added Deborah.