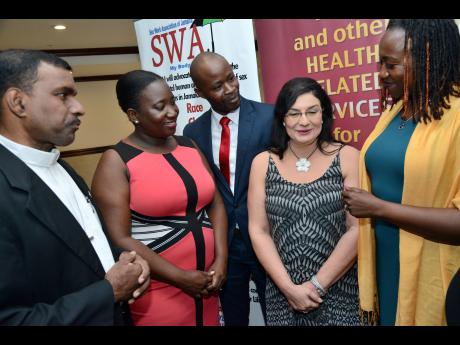 The three scars on his legs are a reminder of the day his male partner got violent and stabbed him, but 31-year-old Tony* blames himself for his injuries, as he says he should not have flirted with other guys while his partner was around.

"We both went church together, but he was abusive. I knew that he was cheating and then I said, I don't think I want to be in this relationship," Tony told The Sunday Gleaner.

"The person didn't want me to leave. He was like, I am sorry, I didn't mean to do it, it is because I feel like you were going to leave and is you cause me to do it," he recounted of the day he was stabbed.

"A soft side of me turn and said I think is me did wrong," added Tony.

Although a recently launched study on intimate partner violence in Jamaica did not assess domestic abuse among gays, Tony said that gender-based violence is a reality in the lesbian, gay, bisexual and transgender (LGBT) community.

"It is the same as a normal female and male relationship that sometimes becomes abusive and sometimes there are disagreements," declared Tony.

He said LGBT couples sometimes stab each other, but oftentimes, he finds that acid is used by the man who takes on the feminine role in the relationship.

"They fight with each other bad," said Tony, as he argued that just like in some heterosexual relationships, some partners do not mind the abuse because they see it is a symbol of love.

"I have friends, and I am in groups with other gay guys from the LGBT community who, if they don't have the big thick tug man them to beat them and let them feel like real woman, they don't feel good; they don't want the soft gentleman," added Tony.

Executive director of the Jamaica AIDS Support for Life, Kandasi Levermore, said her organisation oftentimes provide counselling services to these LGBT couples who turn to them for help. She said the physical trauma is sometimes very visible, while the cause of the abuse varies.

"You would have heard the same kind of stories, the economic issues, the person who handles the money, they control the relationship," said Levermore.

"Any sort of infidelity can result in literal acts of violence, as in beatings and physical violence," she added.

Executive director of the Caribbean Vulnerable Communities Coalition, Ivan Cruickshank, said that while there is insufficient data on the extent of the problem in Jamaica, intimate partner violence within the LGBT community is a challenge.

He said a population-size estimate of men who sleep with men and transgender is currently being conducted in Jamaica and the study intends to look at intimate partner violence. The study should be completed about September of this year.