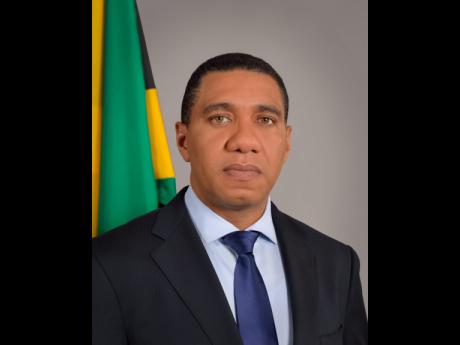 Prime Minister Andrew Holness is today scheduled to hold official talks with Namibian President Dr Hage Geingob, during which memoranda of understanding on cooperation in the field of sports and for political consultations are to be signed.

The talks form part of the slate of activities for Holness, who arrived in Namibia yesterday for what the Office of the Prime Minister (OPM) indicated is the first official visit by a Jamaican head of government to that country.

Yesterday, a release from the OPM said that the Jamaican prime minister was welcomed with traditional festivities at the Hosea Kutako Airport by Namibian Deputy Prime Minister and Minister of International Relations and Corporation Netumbo Nandi-Ndtaitwah; Pohamba Shifeta, minister of environment and tourism; and Christine Hoebes, deputy minister of international relations and cooperation, and other dignitaries.

Holness is accompanied on his visit by Minister of Culture Olivia Grange; High Commissioner for Jamaica to South Africa Angella Comfort; Shorna-Kay Richards, director of bilateral relations at the Ministry of Foreign Affairs and Foreign Trade; Honorary Counsel for Jamaica in Namibia Professor Earl Taylor; and son of Marcus Garvey, Dr Julius Garvey.

The prime minister paid a brief courtesy call on Deputy Prime Minister Netumbo Nandi-Ndtaitwah before being transported in a convoy to the Namibian State House, where he had a short meeting with the president.

The OPM said that both leaders expressed sincere appreciation for the strong ties between Jamaica and Namibia and spoke of the history of cooperation between the two countries in relation to Namibia's independence struggle.

Also today, Holness is expected to meet with members of the Namibian private sector at a luncheon to be hosted by the Namibian Chamber of Commerce and Industry.

Holness will then join the Namibian president for the renaming of a street in the Capital City of Windhoek in honour of Jamaica's first national hero, Marcus Mosiah Garvey.

(EDITORS' NOTE: An earlier version of this article noted that the Office of the Prime Minister said Prime Minister Holness' trip was the first official state visit by a Jamaican head of government to Namibia. However, as the Governor General, representing The Queen, is head of state for Jamaica, the visit to the African nation is not a state visit.)