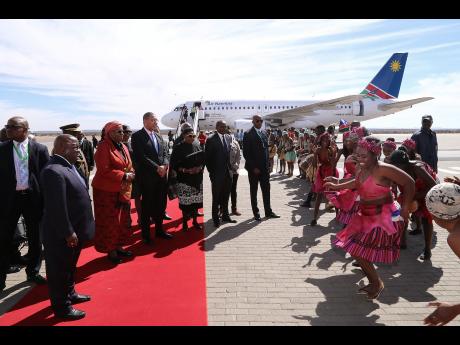 Contributed
Prime Minister Andrew Holness (third left), along with members of his delegation, is greeted on his arrival in Namibia on Sunday.

"We have two beautiful countries, but we scarcely ever get to enjoy the beauty of our countries. We need to encourage travel between our two countries for tourism. I've welcomed the announcement by your president of the waiver of visa requirements for Jamaicans; Jamaica had long ago abolished visa requirements for Namibians," stated Prime Minister Holness, who is on an official visit t0 the African state.

Holness noted that both countries have a keen interest in bolstering their relationship in areas such as trade, banking, sports and culture and he pointed to the "great opportunity" for both countries to continue an exchange of people.

Holness also pledged support for the African, Caribbean and Pacific (ACP) group of states. Jamaica currently chairs the ACP and the grouping is expected to engage the European Union on the Cotonou Agreement that expires in February 2020. The Agreement, signed in June 2000, established a framework of cooperation between the ACP and the EU to foster political, development and economic cooperation.

The prime minister added: "We are stronger together and the liberation struggle may have ended for many Africans, but the new struggle is now for our economic independence and our economic liberation and it makes no sense for us to separate on this matter."