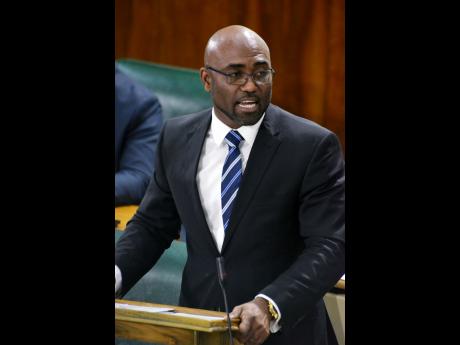 The ongoing scandal that began at the state-owned oil refinery Petrojam has claimed its latest casualty with the resignation yesterday of Andrew Wheatley as minister of science and technology. This follows several weeks of allegations of nepotism and cronyism that triggered investigations from several state watchdog agencies.

Responding to Wheatley's departure, two powerful groups that had previously called for him to step aside as Cabinet minister yesterday welcomed his resignation. They declared that his departure should signal the beginning, and not the end, of the establishment of systems to reduce the recurrence of corruption at agencies under his watch.

"We regard his resignation as appropriate, but belated. It should have happened some time ago. It vindicates the tradition recently established and sustained by successive administrations to have ministers either resign or tender their resignations in a context such as we have in relation to Petrojam," Professor Trevor Munroe, head of National Integrity Action (NIA), told The Gleaner.

President of the Private Sector Organisation of Jamaica (PSOJ), Howard Mitchell, also expressed the view that Wheatley's resignation was welcomed, albeit too late.

Mitchell said that Wheatley's resignation would now clear the way for a proper investigation to be conducted into the agencies under the energy portfolio.

"This is not the end; it is the beginning, and it should be used as an example of a point of departure for the wider society for us to understand that we cannot build a nation, we cannot have the development that we so badly need, and the growth, without all of us living by the rules, not only the public sector," Mitchell asserted.

He noted that the PSOJ was not picking on any political party, noting that over the years, the rules have been broken by respective administrations.

The PSOJ boss contended that the country could not achieve economic growth in the midst of corruption, adding that they were inimical to each other. On June 28, the NIA had issued a statement indicating that the principle of individual ministerial responsibility, which is part of Jamaica's Constitution, as well as code of conduct for ministers, required that Wheatley either tender his resignation or the prime minister ask him to resign.

The NIA said that had Wheatley not resigned, this would have ruptured the tradition of individual ministerial responsibility.

In a release yesterday the People's National Party (PNP) said it also welcomes "the long overdue removal of Dr Andrew Wheatley from the Cabinet of Jamaica". However, it has sounded a note of caution that his resignation would not be the end of the matter.

It says the criminal investigations by the Major Organised Crime and Anti-Corruption Agency, the Financial Investigations Division, the auditor general and Integrity Commission into the activities at Petrojam and National Energy Solutions Limited must be pursued to their final conclusions "and let the chips fall where they may".

The PNP said that the prime minister has a duty to ensure that these agencies receive the necessary resources to complete their investigations and provide their reports in a timely manner to the people of Jamaica.

Munroe highlights ministers who resigned in wake of scandals