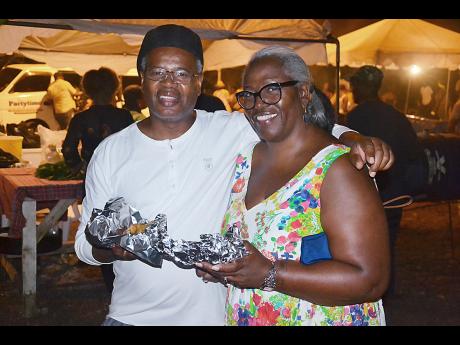 Jamaicans from all across the island turned out in large numbers on Tuesday night (July 31) at Seville in St Ann to celebrate the 21st anniversary of Emancipation Jubilee under the theme 'The Genesis'.

Performers, stretching from Westmoreland in the west to St Thomas in the east, graced the stage in dance, song, and drumming as the country celebrates 180 years of freedom of Africans from slavery.

Several overseas-based Jamaicans, home for the holidays, were among the crowd and showed that they were still in touch with things Jamaican by supporting the food and craft vendors.

London-based Anthony Walker and his wife, Juliette, were quite happy to be among the huge crowd, although it wasn't planned beforehand.

"The neighbours knocked on our door and said we're going to this, so we just came along," Walker told The Gleaner.

While living in London, they heard about Emancipation Jubilee but had never attended. They were happy finally to be able to as they thoroughly enjoyed the jerked chicken and festival, and at the time they spoke to The Gleaner, they were eagerly awaiting the hot chocolate.

The show itself offered much. It was held this year in honour of Nanny, Sam Sharpe, Paul Bogle, and Chief Tacky.

All for the love of hot chocolate