PM: Don't confuse investments with a strategy for growth 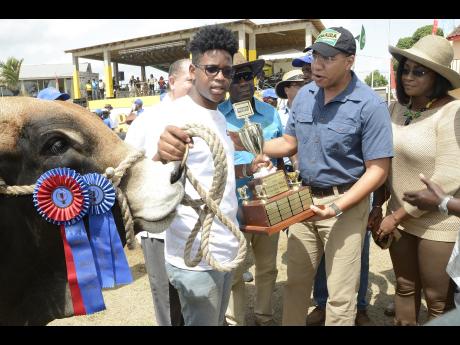 Investments do not necessarily automatically translate into or contribute to economic growth unless there is significant value added, Prime Minister Andrew Holness explained during his keynote address at the 66th staging of the Denbigh Agricultural, Industrial and Food Show in May Pen, Clarendon, yesterday.

"We tend to confuse the strategy for growth with investments, and we see a lot of investments coming into the island, but it does not necessarily mean that they will generate growth. It all depends on the value that that investment is expected to add to the material, to the resources, that already exist in your economy," he said.

Said the prime minister: "Growth is not achieved necessarily by building new, impressive structures. Growth is achieved by using your raw materials in such a way as to create a chain in which you are constantly adding value."

He added: "One of the challenges that we face in independent Jamaica is how to grow our economy. Of our 56 years, it is estimated that over 40 or so years of independence, we have had an average growth of somewhere in the region of just below one per cent per year. That isn't classified really as growth, and Jamaica has to solve the growth conundrum in which we find ourselves.

"No matter how much empathy politicians have, no matter how big a heart we have, we cannot solve the poverty problem unless we solve the growth problem. That is the reality."

It is for this reason that the prime minister challenged farmers to incorporate greater use of technology in everyday agricultural practices in order to enhance the country's productivity and competitiveness in the global arena.

"As we celebrate our independence, one of the things that we must pay attention to is how well we are innovating as a people. We cannot afford to be left behind, not just Jamaica, but all small-island states that face the problem of climate change. It's the greatest challenge that we face, and, therefore, as a society, we must become innovative in applying technologies to solve the problems that climate change creates," Holness charged.

Speaking on the 56th anniversary of Jamaica's political independence, the prime minister reminded his audience that eternal vigilance is the cost of freedom.

"Freedom is the eternal responsibility for using that self-determination, that sovereignty in a way that will enhance the public good and the betterment of the people," he stated.