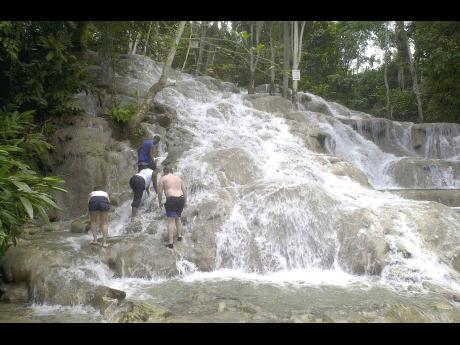 Concerns by members of the board of the St Ann Development Company (SADCO) about ticket revenue being generated at Dunn's River Falls and Park have prompted a major investigation. The police Fraud Squad, Major Organised Crime and Anti-Corruption Task Force, and the Office of the Auditor General are among the entities probing the case.

The Urban Development Corporation (UDC) last week signalled the start of the probe as it announced that it has ordered a detailed examination into the operations of SADCO, specifically in relation to Dunn's River Falls and Park.

While not providing details, the UDC said that based on preliminary internal reports, there was sufficient cause for concern.

According to Gleaner sources, the issue was first raised during the March meeting of the SADCO board where it was noted that the gross income from the falls had declined by $10 million, or seven per cent, to $127 million.

By the April meeting of the board, SADCO directors noted that recorded earnings from local entrants had increased but the pre-sales figures did not reflect this rise.

The board instructed its finance committee to review the day-to-day sales breakdown, report the matter to the UDC, and request its auditors to conduct a review of the February sales, and have an internal audit conducted to determine if unauthorised persons were selling tickets to enter Dunn's River.

According to the Gleaner sources, by its May meeting, the SADCO board was convinced that some corruption was taking place at Dunn's River Falls and Park, as numerous discrepancies were seen in the financials for the attraction.

"The board requested that UDC's auditors conduct an audit of the financials of Dunn's River and SADCO itself, especially to determine if staff were selling tickets to tourists at Jamaican rates and benefiting from the difference in rates," said the source.

"The directors were of the view that fraudulent activities were taking place based on the discrepancies in two consecutive financial reports," added the source, who noted that a request was also made to the UDC for approval to engage security observers to provide oversight and reconcile ticket sales at the cashier stations.

The UDC has said that the investigation would not affect the day-to-day operation of the Dunn's River Falls and Parks, which will remain open to the public.