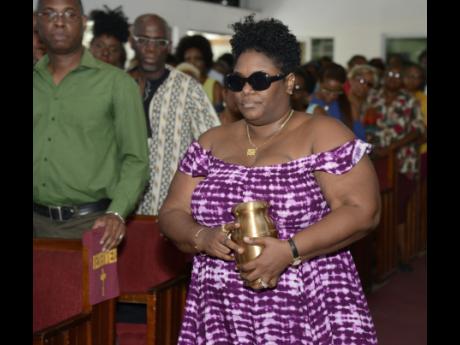 Ian Allen
Alisia Jarrett walks with the urn containing the remains of her husband, Irvin 'Carrot' Jarrett, during his memorial service at the Webster Memorial Church in St Andrew, yesterday.

The drums that welcomed celebrants of Irvin 'Carrot' Jarrett's life into the Webster Memorial United Church yesterday afternoon were not beaten at the sonorous pace of a death march. Although the musicians' faces were generally sombre, they played with an exuberance matching Jarrett's expression in two of his performances pictured in the programme and representing the life of the former percussionist with the Third World band.

Most of the persons filling the church at 53 Half-Way Tree Road, St Andrew, obeyed the "cheerful colours" guideline, although there were a disobedient few who would not be caught alive without a suit on a formal occasion. As the service started, the transition of music from the drummers at Webster Memorial's main entrance to the musicians - including Jarrett's former Third World band mates - in the raised choir area was seamless, and music (especially Always Around) played a prominent role throughout the service, which was presented in four sections, much like a CD box collection.

In that format, segment two was the disc with much of Jarrett's (who died last week Tuesday and who was subsequently cremated) life history, where his multiple talents and generous, compassionate personality were related by those who knew him at various stages of his life. Close to the beginning, Alma Mock Yen recalled meeting a special child who developed so well that "his hands held genius". From close to its end, Jarrett's widow, Alisia, said Carrot, who she married in 2013, "has brought nothing but joy and happiness into my life. I have learnt to love myself and the Almighty".

Jarrett's daughter, Rain, speaking on behalf of her siblings, remembered her father's striking physical presence and the special individual bond he had with each of his offspring. And Dr L'Antoinette Stines, describing herself as Carrot's first dance partner, revisited their childhood when she would dance and he would make rhythms, moving through the church's aisles. Among former Third World member Ibo Cooper's many humorous Carrot memories were the perfectionist craftsman who made soul combs.

In the end, encapsulating the blend of faiths in which Jarrett was celebrated, Coleen Douglas thanked the ministers for "accepting Rasta in Jesus church".

The Rev Dr Kofi Nkrumah Young who delivered the sermon being the minister who had officiated at the Jarretts' wedding. Bongo Herman led a chant of Fly Away Home as Jarrett's urn was carried out and the congregation followed.