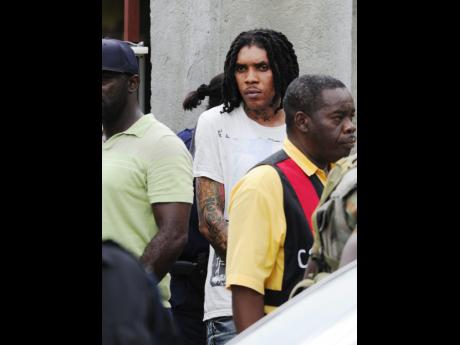 Two of the jurors who handed down the guilty verdict in the Vybz Kartel murder trial in 2014 are claiming that their lives have been transformed into nightmares since then.

The two are now living overseas and say it has been difficult trying to make a new life in a foreign country away from their families.

They are among three of the 11 jurors who relocated overseas after Kartel, whose correct name is Adidja Palmer, and his protege, Shawn 'Shawn Storm' Campbell, were convicted, along with Kahira Jones and Andre St John, for killing Clive 'Lizard' Williams in August 2011.

They also gave evidence in the corruption trial of 50-year-old football coach Livingston Cain, a fellow juror, accused of offering them $500,000 to return a verdict of not guilty against the entertainer.

Cain's corruption trial is still ongoing before the Kingston and St Andrew Parish Court while the Court of Appeal is still deliberating on the legal challenge filed by Kartel and the other men against their murder conviction, but the two jurors last week expressed fear that they will never set foot in Jamaica again.

"Why is this taking so long? Why are you going to draw out the trial of the man," one of the jurors told The Sunday Gleaner during a telephone interview last week in reference to Cain.

She relocated overseas under Jamaica's Witness Protection Programme and charged that the local justice system is in need of urgent overhaul.

"The witness protection programme is designed for criminals who turn over evidence to the police. It is not designed for law-abiding citizens who built a life in Jamaica," said the former business owner.

She said she is now struggling to find, and maintain, a job in her predominantly Caucasian neighbourhood.

"If you are a criminal in Jamaica and nothing is going on in your life, and you decide to turn over evidence and go on the witness protection programme you may enjoy it because you can start over, but for a person like me who is an extrovert, family-oriented and love having friends around, the answer is no," she added.

"All of my personal information has been changed, which simply means I have no past. I have no identity and I am a citizen of nowhere. That hurts," she declared.

According to the former juror, she has even contemplated suicide as a means of escaping her situation.

She said she is prohibited from speaking to relatives outside of the eight days per year they are allowed to visit her at a location away from where she lives.

The juror said her identity has been changed and she has been barred from contacting anyone in Jamaica, and from speaking to any Jamaican she may come across where she is located.

Her social-media accounts are also monitored; and while the Jamaican Government gives her a stipend and pays for her living quarters, she must work to take care of her other needs.

But because she is not a citizen of the country that she now lives in, she has to work menial jobs.

"I spent Christmas by myself, I spent New Year's Day by myself, and what angers me even more is that the person, the juror who is the main source of this whole thing, was able to spend his holidays out on bail with his family. It is as if I am in prison for taking an oath to serve my country," she said.

The second juror is not a part of the witness protection programme, but applied for, and was granted, special migration privileges by the country where he now resides, after he outlined his ties to the Vybz Kartel trial and his safety concerns.

But he left a wife and children in Jamaica and he has not seen them in person in more than three years. He fears that he will never be able to visit Jamaica again.

"I really thought that this process would have been completed already, but since I moved it has been a battle in court and nothing is really happening," he argued.

"I fret every single day for my family because up to this point they are still there, and my son is getting older and he is asking where his daddy is every day and we can only video chat. I can't even mention the sleepless nights, all the hurt and the pain," said the juror.

For the two, returning to Jamaica would be their ultimate pleasure.