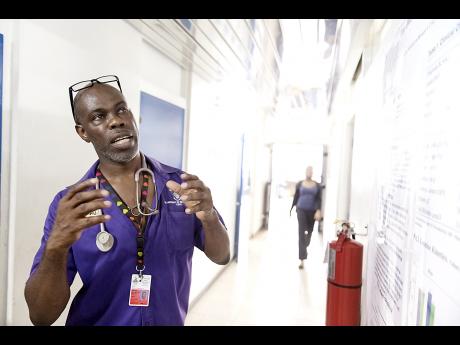 Gladstone Taylor
Professor Marvin Reid pointing to the several things that will need to be done before the Nuclear Medicine Centre will reopen at the UHWI.

Jamaica's effort to fight cancer and chronic diseases has received a major boost with the investment of more than $250 million into the re-establishment of a Nuclear Medicine Centre at the University Hospital of the West Indies (UHWI).

The centre is now being retrofitted and is expected to be open early next year. The project is a massive undertaking which has seen officials of the UHWI, the University of the West Indies, Mona campus, the Planning Institute of Jamaica (PIOJ) and the Ministry of Health working with representatives of the International Atomic Energy Agency (IAEA) to create what will be the only nuclear medicine facility in the public sector.

During a recent tour of the facility, country counterpart for the project, Professor Marvin Reid, told The Sunday Gleaner that nuclear treatment has become an important component of any cancer strategy as the technology is useful for both diagnosis and treatment.

"To operate the facility is actually going to be very, very expensive, but is an important component of any modern health service. As a matter of fact, some people now have to be going to Miami, Canada to get some of those services," said Reid.

It will cost the hospital US$1 million to retrofit the centre, while the IAEA has contributed €783,600 to the cause. Among other things, the IAEA has purchased the machine that will be used at the facility and has funded the training of those who will provide technical expertise.

"There are a couple of things that have to be done before we can start offering services to the Jamaican population. The machine has to be installed and have to be tested. We have to make sure that there is no radioactivity leaking all over the place; protocols have to be finalised [and] the downstairs, which is the work office, has to be up and running so that we can generate the chemicals that we need," added Reid.

He said a proposal for assistance to re-establish the centre was sent to the IAEA through the PIOJ from 2010, but the project was not officially launched until 2014. One of the concerns was the retention of staff at the facility, since the migration of qualified employees was the main reason for the closure of the previous nuclear medicine facility at the hospital in the mid-2000s.

Reid said UWI has started to train the various categories of persons that are needed and the IAEA has also trained a nuclear pharmacist, a nuclear medical physicists and nuclear technicians to operate the machine.

While nuclear medical treatment is offered in the private sector, its availability in the public sector will mean that patients will be required to pay just a minimal fee for treatment, if any at all.

Nuclear medicine uses a trace amount of radioactive substance for the diagnosis and treatment of cancer, heart diseases and other chronic conditions. It allows doctors to observe physiological functions and metabolic activity in the body.

"It is very useful to ascertain the metastasis or spread of cancers, which will ultimately guide the doctor as to how best to treat it," said Reid.

He noted that radiation safety is a concern, but this is being taken into consideration with the re-establishment of the building.

"It looks like a simple little building, but there are a lot of things that go in them. The walls have to be a special thickness, it has to have lead in them, so there is no radiation that comes out, the doors have to be specially made, the flooring have to be special in case there is a spill of radioactivity.

"The air-conditioning system has to be special so you don't have air blowing radioactive material out in the atmosphere and people breathing it," noted Reid.