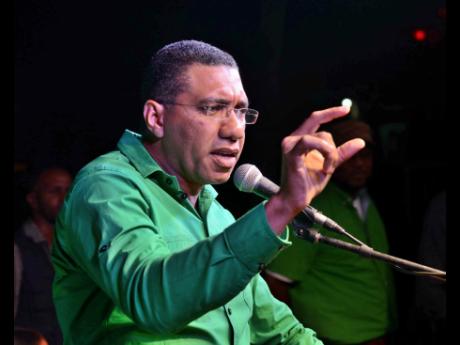 Andrew Holness, leader of the Jamaica Labour Party (JLP), says his Government will not neglect the important role politics plays in governance.

He asserted that previous JLP administrations lost touch with citizens by focusing on government policies and goals without striking a balance through engagement at the local level.

"We don't just start with better policies; policies have to be grounded in politics. Politics really means what you, the people, decide. And sometimes we go out there with better policies, but the people don't decide to support it yet," said Holness at a rally in Brown's Town on Sunday, where Ruel Reid, minister of education, youth and information, was introduced as the JLP caretaker for St Ann North Western.

He added, "Whatever the Jamaica Labour Party is doing, we not going to forget the politics we are going to be out there in the field."

Holness disclosed that a general election, which is constitutionally due in 2021, is not on his radar at the moment, but he predicted that the JLP will snatch the seat from the People's National Party's Member of Parliament Dr Dayton Campbell. The medical doctor beat the JLP's Othneil Lawrence by more than 800 votes in 2011, but defeated him by a slimmer margin of 410 votes in 2016.

Holness presented Reid as an educator who was committed to Jamaica, but he also lamented the negative undertones that accompany forays into the political arena.

"We have given in this country a bad name to politics, that if you talk about politics there is some kind of connivance against the people, it is a nasty bloodsport. But politics is the highest calling of man, because politics is about selfless service to fellow man," said Holness.