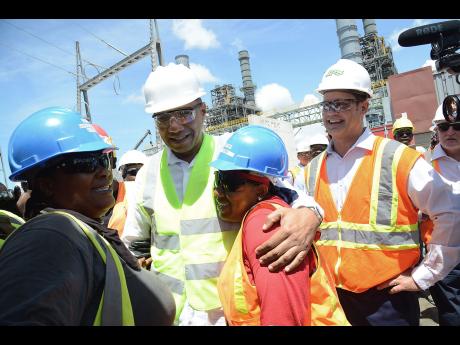 The construction of a new combined energy plant in Old Harbour Bay, St Catherine, is poised to help improve Jamaica's energy security. At the same time, the economic and cultural exchange benefits have sparked enthusiasm among workers.

Of the 608 employees, 217 are residents of the Old Harbour Bay community, 239 are from other parts of Jamaica, while 152 come from some 10 other countries, including Peru, Mexico, Spain, Portugal, Britain and South Korea.

The foreigners were brought in to fill technical and high-skill positions, for which locals lack experience and certification.

"Working as a secretary on the project has been good financially. It has helped me pay off my tuition. I was even able to move to a better location than where I was living before," Old Harbour Bay resident and plant worker, Debra-Kaye Brown, told The Gleaner during a tour of the facility yesterday.

"The first time I came here, it was a bit intimidating [working with different foreigners] but now, we even have Spanish classes on Fridays. One of the Spanish persons come in and helps us learn the language. It is good cultural exchange," she said.

Time supervisor/manager Ramon Tavares shared that persons have been learning new and important skills, for which certification can be sought in the future.

"I have learned various skills, especially in areas you don't work in generally. You grasp skills that you can use in the future. Right here, you learn skills you won't get in school. This plant is not just a power plant. It is a new version of how power plants should be built," he said.

The construction, termed OH190MW Project Renaissance, is worth US$330 million and is being carried out under the Jamaica Public Service's subsidiary entity, the South Jamaica Power Company. The entire project should be complete by mid 2019.

Prime Minister Andrew Holness described the development as heart warming and urged workers to get themselves certified because many more major projects are coming.

"These kinds of infrastructure use significant foreign exchange but they generate significant employment. It shows that we can bring foreign investors together, working with local labour and know how to achieve major things for our economy. This is major for Jamaica. The facility, which is almost twice as efficient as the old plant, will ensure our energy security. Average consumers will inevitably see a reduction in electricity prices," said Holness.

"The plant uses liquefied natural gas (LNG) but it also uses automotive diesel oil (ADO) as back-up fuel and it is more efficient and friendlier to the environment. We will be seeing large projects of this nature in the future. Training, of course, will always be an issue. As the plant moves from a rudimentary construction phase into the more technical areas, workers will require higher level skills. I encourage people living around the community to get certified."