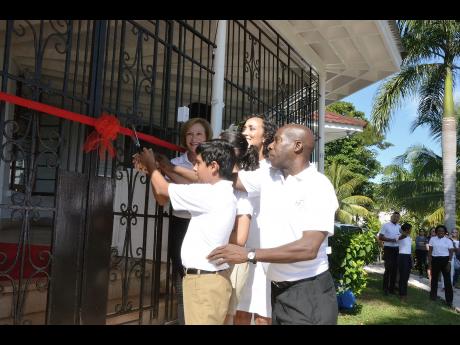 Chuganey, a graduate of Mt Alvernia Preparatory and the recipient of a government scholarship, and the Taracenas, whose father is a vice-president of a business process outsourcing company, joined 17 other students, some from as far as Ocho Rios and Negril, to make history yesterday morning when FIA officially opened its doors at a temporary location in Reading, Montego Bay.

Within two years, the school expects to have a permanent home in Fairfield, St James, on lands donated by land barons Mark and Paula Kerr Jarrett.

"Campion is too far away from my family. I wanted to stay with them. And this is an international school that allows me to catapult into studying overseas," 11-year-old Chuganey told The Gleaner.

Currently, FIA accommodate students between grades six to nine, and once the school builds out grades 10 to 12, it will be possible for children to graduate with a United States high school diploma, an International Baccalaureate (IB) Diploma, or both.

Overall, the plan is to provide enough classrooms and teachers to bring "a growing interest in developing a new model of education, not what to learn, but how to learn," stated FIA board chair Lisa Lake.

Some 350 students can be accommodated on completion of construction, which will take about two years.

"We now have 20 students at this facility and have space for 20 more," added Lake, noting that at no time will any of the classes have more than 20 students.

FIA was born out of the great need for secondary institutions on the north coast as most of Jamaica's top secondary schools are located in Kingston, often resulting in young children and parents having to make significant family and financial sacrifices in pursuit of prime education.

"Montego Bay is international. People are coming from everywhere and leaving to go everywhere in the world. This type of growth requires infrastructure to support it, not just highways and hospitals, but schools," argued Lake.

Most importantly, Lake is of the opinion that parents on Jamaica's north coast who desire this global model of education for their children should be able to access it here without splitting up and sacrificing family life.

The school offers mathematics, science, social studies, language arts, Spanish, art, physical education, and music. In addition, there are courses in technology occurring in homerooms along with talented and gifted options within each course.

According to Shirley Davis, the head of school, students are led by a cadre of national and international educators who are masters in their individual fields.

More than 70 per cent of the teachers at the school have earned their master's degree and teach in the content area of their expertise.