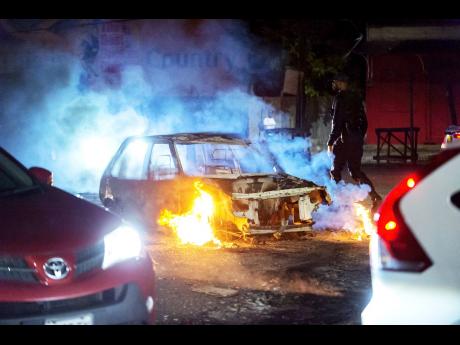 Gladstone Taylor
A burning motor car, allegedly left by protesters along Arthur Wint Drive in St Andrew. Residents of Swallowfield had blocked the road to protest the killing of a teenager on Providence Pen Lane in the community on Monday.

Police personnel and residents had to scamper for cover yesterday evening in the Swallowfield area in St Andrew, as gunmen challenged lawmen in a gunfight.

Last night's melee is said to have stemmed from a police killing of a teenager on Bundy Lane in the community on Monday.

Police sources told The Gleaner that yesterday morning, hoodlums attempted to firebomb the Stadium Gardens Police Station. There was also an unconfirmed report that gunmen opened fire on the station. Debris was used to block a section of Arthur Wint Drive, near the station.

The police subsequently cleared the road after calling in reinforcements.

Minutes after clearing the roadway, however, cops on Arthur Wint Drive were forced to take cover as gunshots rang out from inside the community.

Superintendent of police in charge of the Corporate Communication Unit, Dahlia Garrick, told The Gleaner last evening that there was a strong police presence in the area where the roadblock was mounted.