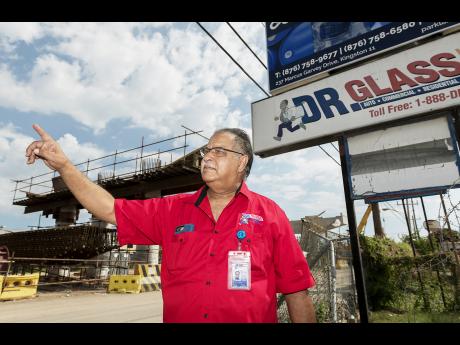 Gladstone Taylor
Dwight Clacken, general manager of Dr Glass Limited, located near Three Miles, speaks with The Gleaner yesterday. The business, like many others in the area, has been impacted negatively as customers find it difficult to access the area owing to the blocking of the intersection as a result of major road construction.

With noticeably fewer customers turning out and observing sharp dips in earnings just five days into the planned eight-month closure of the Three Miles intersection, businesses operating within the proximity of the major crossroads are fearful that the full term might cripple their establishments.

While stating that they have been ramping up alternative methods such as increasing their delivery capabilities to preserve their customer base, the business heads who spoke with The Gleaner yesterday agreed that the early signs were not encouraging, arguing that the road project was founded in poor planning, execution, and communication.

"What is happening outside is a lesson in incompetence at a very high level. It does not have to happen this way," asserted Dwight Clacken, general manager of Dr Glass Ltd.

"The project manager, whoever he is, has to speak up. He or she has to be held accountable, and if the Government sits by and allows what is happening to continue, then it's not just a matter of incompetence, but a lack of care because it is affecting thousands of people. It is the sidelining of businesses," he said.

"My experience tells me that the Chinese, or any company that takes a big contract like this works by what you call a critical path, meaning, they know what's going to happen today, tomorrow, and next month. It's all planned ahead. So this ad hoc blocking of roads is nonsense."

Disruptions in Internet connections, phone lines, as well as the dust nuisance are also major sticking points for Clacken.

Also feeling the debilitating effects of the road project, Hyacinth Barnes, supervisor at the Texaco Service Station along Spanish Town Road, admitted that they have already sent home some workers owing to a "drastic" dip in sales.

"I've been here for the past seven years, and this has been the worst in terms of sales. I'm here checking the books, and it's frightening - the decline I've seen from Monday to now. We use to have two pump attendants in the morning, two in the evening, and we're down to one now because they have no work to do," she lamented.

"Additionally, the planning in terms of the detours is so bad, and now we're suffering the consequences. The losses are great, and remember, when we order the gas from Petrojam, we have to pay them, (pay) our workers and our bills. We can't manage another month of this much less eight (months)," she stressed.

Commercial Manager of Sampars Craig Robinson told The Gleaner that there has been a 15 per cent decline in walk-in customers since the beginning of the road works.

"Most of the alternative routes are just not convenient, and persons are just going to go to other locations due to the ease of getting there," he said.

A visit to Tastee and Tropicair in the vicinity of Three Miles also revealed a dearth of customers.