JET banking on new plastic policy to save the environment 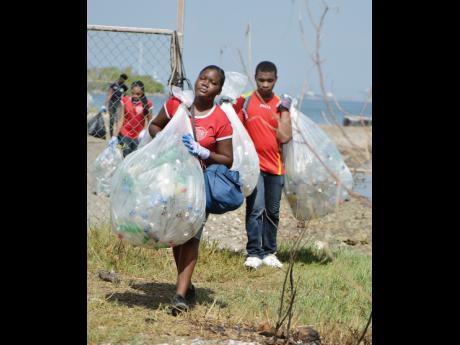 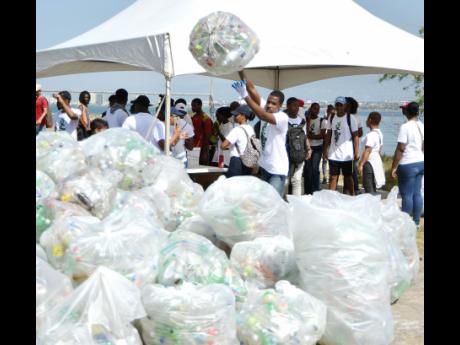 Kenyon Hemans
A mountain of plastic bottles collected along the Palisadoes strip yesterday.
1
2

Minister without portfolio in the Ministry of Economic Growth and Job Creation Daryl Vaz is scheduled to announce the phased ban on single-use plastic and Styrofoam tomorrow, and it could not come soon enough for Suzanne Stanley, CEO of Jamaica Environment Trust (JET).

As volunteers cleared tons of garbage, mostly plastic bottles, from the island's beaches yesterday, as part of International Coastal Clean-up Day 2018, Stanley told The Sunday Gleaner that she was looking for the announcement from Vaz as this could change how persons dispose of plastic waste.

"In total, there were 169 sites islandwide where there has been clean-up, pulling out tons of plastics and Styrofoam among other kinds of garbage. This shows the level of work needed regarding our environment," said Stanley.

Coordinated by JET, International Coastal Clean-up Day 2018 brought out more than 2,500 participants representing government agencies, church groups, service clubs, and schools in a labour-intensive day in areas including around the Palisadoes strip and Kingston Harbour.

The volume of plastic bottles pulled from bushes along sections of the Palisadoes is not lost on Stanley.

She argued that Jamaicans need to understand that littering does not provide jobs, only destroys the environment, and will cause massive disruption of life.

"The notion is that if garbage is improperly disposed of in our gullies and streams, on our roadways and at every corner, we are simply giving someone a job to clean it, is more than irresponsible. It is careless and nasty.

"What we are ultimately doing is killing our children's future and our planet," said Stanley.

The proposed ban on single-use plastic and Styrofoam was firmly placed on the table by Senator Matthew Samuda in 2016 when he piloted a resolution in the Senate.

A multi-sector working group, chaired by Dr Parris Lyew-Ayee, was set up and completed its task in October 2017 before the Cabinet made its decision.

But up to last week, the parties were still in talks with a group of retailers who raised more questions on how the ban would be implemented.

Retailers' questions for the Government

1 What replacement packaging material is being proposed when the ban on single-use plastic and Styrofoam is implemented?

2 Will the Government be providing support to retailers, and what will be the nature of that support?