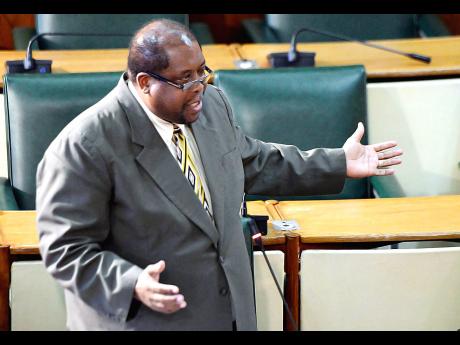 Opposition Senator Lambert Brown has charged that for the past two years, the Government has waived income tax of $780,000 per month for a senior official at the finance ministry.

According to Brown, the waiver was for a senior technical director who was earning a monthly salary of just over $2 million.

"The initials M.D. would come to your mind, Mr President," he said during the debate in the Senate yesterday that preceded a vote to extend the state of public emergency in the St Catherine North Police Division for another three months.

The assertion by Brown came as he responded to a statement made by Leader of Government Business in the Senate, Kamina Johnson Smith that her administration was seeking to grow the economy so it could pay better wages to the police and other public sector employees.

"It is amazing that when it comes to looking after the police, we find excuse about growing the economy, but [there is] a single individual in the Ministry of Finance ... [for] whom the Government waived income tax of $780,000 per month," The veteran trade unionist charged.

"Not salary, enuh. That's the income tax waived per month for two years. That could help the police and we wouldn't need to grow the economy."