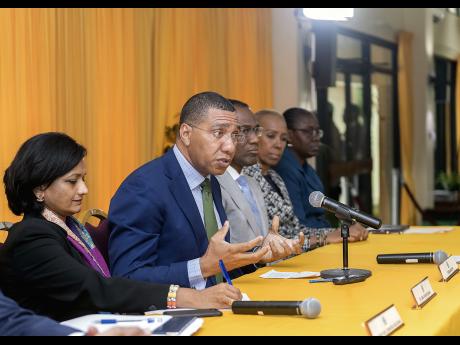 Prime Minister Andrew Holness is warning that the management and running of all state entities will come in for intense scrutiny. Following a ringing endorsement of government programmes under the latest bi-annual International Monetary Fund (IMF) review, Holness committed to an examination of how state agencies are run.

"Governance will be a part of the next semi-annual review. That is a very important message that the entire Government should pay attention to," Holness told a special Jamaica House press conference called to announce the results of the latest IMF review.

Responding to a suggestion that he had set the entire Government on warning, Holness agreed.

"If it was interpreted as a warning, I wouldn't object," Holness said.

He outlined that Government has a duty to intensify the scrutiny of board appointees. Speaking against the backdrop of proposed regulatory changes governing the selection and management of state boards, Holness is mandating that even without regulation or specific policy, Government must identify the skills and competences necessary to ensure that institutions operate in a way that is aligned with the stated targets of economic growth and prosperity.

JAMAICA HAD MET OR EXCEEDED ALL TARGETS

She said that Jamaica can now draw down on US$226 million if needed under the present cycle for a total available credit of US$1.2 billion, which "the Jamaican, authorities continue to treat as precautionary", she said.

Ramkrishnan noted that economic growth is projected to reach 1.4 per cent by March 2019, supported by mining and construction activity, with a further medium-term projection of two per cent growth in gross domestic product.

social and growth-enhancing spending, noting that it is a difficult but critical reform.

"Leveraging the current window from the current wage agreement will help prioritise government functions and institute a new framework for compensation for public sector employees," the IMF mission chief said.

Ramkrishnan said that the strong economic fundamentals and sustained effort at reforms provide the private sector with an unprecedented opportunity to extend investment, generate economic activities, and become the engine of growth in Jamaica.

Supporting the call, finance minister Nigel Clarke said that Government is committed to the reform agenda and is escalating efforts aimed at increasing domestic investment and growth, boosting job creation, and bolstering economic resilience while maintaining a prudent fiscal posture.

For his part, Holness said that while he was not blaming the private sector for inactivity, he was encouraging them to get on board.