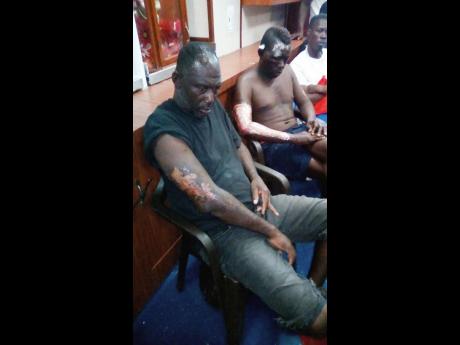 Contributed
Some of the Jamaican fishermen show the burns they received from the fire that sank their boat.

The Ministry of Foreign Affairs said it hopes to have the 28 Jamaican fishermen who are now in Colombia returned to the island this weekend.

The men have been in Colombia since last Friday after being rescued following a fire that destroyed their boat.

In a statement, foreign affairs minister Senator Kamina Johnson Smith said that while the ministry has been given clearance to repatriate the fishermen, those still being treated for burns could not be released from medical care until yesterday at the earliest, "so arrangements for everyone's return have to take that timing into consideration".

"The safe and earliest possible return of the men is the immediate concern of the Government of Jamaica. We are working with the Colombian authorities to arrange for their safe return. We hope this will happen over the weekend," added Johnson Smith.

She said that the owner of the boat, who operates a commercial fishing company and who has also been in contact with the foreign affairs ministry, maintains daily contact with the fishermen and has been keeping their families informed.

Last Thursday, the fishermen were on a fishing trip when their vessel caught fire and eventually sank. They were rescued and later taken to San AndrÈs, an island off the Colombian coast, by the Colombian navy.