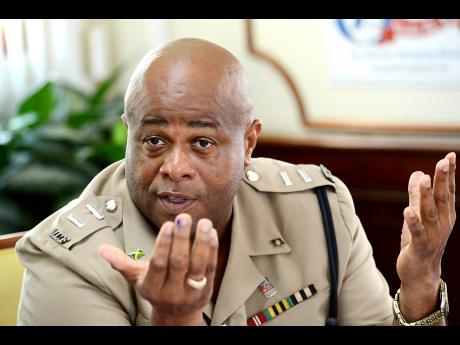 Lionel Rookwood
A policeman holds on to a suspect in the shooting of five persons in August Town, St Andrew on February 19.
1
2

Bloodthirsty gangsters living overseas with wads of cash are offering big money to have their enemies killed in mainly revenge attacks, in the volatile August Town, St Andrew, community.

The August Town community, a usual crime hotspot, made national and international headlines when it recorded zero murders for 2016. Today, however, there are fears that the divided community, with an estimated 30 corner gangs, is teetering on chaos as they target each other.

Sub-officer in charge of the August Town Police Station, Inspector Keith Steele, told a Gleaner Editors' Forum last Thursday that 13 people have been murdered in August Town since the start of the year, and that the number threatens to grow based on information on the streets.

"The gang situation in August Town is at a very serious level at this time. The situation that now exists is an internal gang conflict," said Steele.

He cited the sections of the greater August Town community known as Hermitage, Jungle 12, Bedward Gardens, Goldsmith Villa and African Gardens among those entangled in a bloody web.

"Of the 13 murders that have been recorded this year, eight of those persons were from Hermitage or were affiliated with persons in Hermitage," said Steele.

Stewart, who was a resident of Bedward Gardens, was ambushed and killed in an open lot. Since then, persons overseas, determined to avenge his death, have allegedly been offering cash payments for the killing of anyone from Jungle 12. They claim his killers are from that area.

According to Steele, in addition to a bar shooting in January that claimed the lives of five persons, and which left two others injured, there have been a string of murders and shootings, the latest being last Tuesday night.

Steele expects the murder count to increase by one shortly as 22-year-old Duhaney Shaw, of a Jungle 12 address, has been reported missing since last week and it is suspected that he has been killed and his body buried in the area.

The tough-talking cop, who residents demanded be returned to the area as the violence escalated at the start of the year, said the police have already searched five locations for the body to no avail.

He said the August Town police are planning to get help from its Canine Unit to continue the search.

"The information that we are getting is that his (Shaw's) death is in relation to a gun that went missing," said Steele.

He expressed concern that many of the gangsters in August Town remain on the streets because witnesses are afraid to report what they know.

In the meantime, head of the August Town Peace Builders Group, Kenneth Wilson, said several social factors, including a lack of resources, are to be blamed for the breakdown in the peace in the community over the last two years.

He said urgent intervention is once again needed to curb the string of killings in the community.

"We are now bracing for a kind of explosion in the Jungle 12 area because of the disappearance of this youth (Shaw), and most of the persons who are calling the shots are not living in the community. Some of them are not even living in Jamaica," said Wilson.

"Try as we may, you have persons who are taking instructions. As long as they are getting instructions from overseas, you could talk until you are blue ... . These instructions come with much financial weight," added Wilson.

The Caribbean Policy Research Institute (CAPRI), which has completed a soon-to-be-released study on crime in August Town, has found that the release of some key gang

leaders from custody at the start of 2017 was one factor which is also fuelling the crime.

According to the CAPRI study, while 50 per cent of the murders in August Town last year were related to domestic disputes, all 13 murders so far this year have been gang-related.

CAPRI researcher Laura Koch told the forum that between 10 and 13 gangsters returned to the community in early 2017 and the murders started going up shortly after they returned.