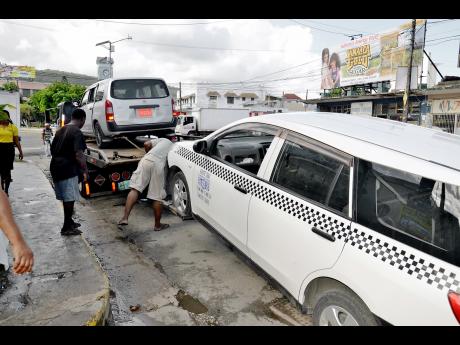 Wrecker companies operating in the Corporate Area are facing renewed criticisms from taxi operators, who are adamant that they are colluding with rogue traffic policemen and eating away their profits.

President of the Transport Operators Development Sustainable Services Egerton Newman said that taxi operators are being asked to fork out three times the usual amount for wrecker service whenever their vehicles are being seized for road violations.

"If the cost of the wrecker from point A to point B is to be $9,000, and they are charging $20,000 or $25,000, then somebody is getting something out of that. If you talk to the wrecker company, they are going to tell you 'is not we set the price'," said Newman, following a press conference in the Corporate Area last week.

He charged that some policemen use wrecker companies operated by their friends to seize vehicles found to be operating contrary to their road licences.

But head of the recently formed Police Public Safety and Traffic Enforcement Branch, Senior Superintendent Calvin Allen, last week told The Sunday Gleaner that any such practices go against the policies of the Jamaica Constabulary Force.

"If a vehicle is going to be seized, that officer in charge is not to dial any wrecker company directly. The policeman or sub-officer in charge calls Police Control and control then calls a wrecker to deal with that seizure. If you see it going otherwise, it ought not to be," said Allen.

He underscored that the police have nothing to do with the fee charged for the wrecking services.

"The wrecker company decides on the cost, and anything you see going on otherwise, we need to know," declared Allen, as he explained that the Government employs a pool of wrecker companies to deal with such matters.

This explanation did not satisfy Newman, who told The Sunday Gleaner that the wrecker companies blame the police and the Transport Authority for the rates.

The Transport Authority's website lists a $8,000 towing rate for motor cars and a $15,000 rate for Coaster and Hiace buses within a five-mile radius.

Neither of two Corporate Area wrecker companies contacted last week said that they had any knowledge of collusion between the police and the companies. They said that it costs a little over $9,000 to tow motor cars around town.

But one operator of a wrecker company in rural Jamaica told The Sunday Gleaner that the allegations have come to him, and he has had to defend himself from motorists who accuse him of colluding with cops.

"I have been in the business for more than 21 years and I have always heard that. It is even alleged that some of the wrecker companies are owned by police officers.

"People say that I am colluding with the police, but I have to make a man know that I am only doing my work and they must take up those matters with the courts," said the operator who asked not to be named.