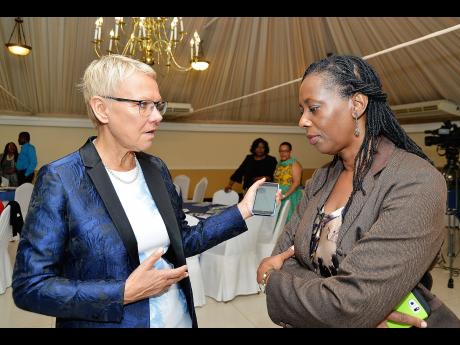 Head of the European Union (EU) Delegation to Jamaica, Malgorzata Wasilewska, is calling for the society to stop laying the blame solely at the feet of women when their sons get involved in criminal acts.

Speaking at the 'Win-Win: Gender Equality Means Good Business' seminar, which was held yesterday at the Terra Nova All Suite Hotel in St Andrew, the EU head indicated that she believes there needs to be a more balanced approach to holding both genders accountable on crime. The programme was hosted by United Nations Women, International Labour Organisation and the EU.

"There are so many families where the father abandons the mother of a child or is not there with child rearing. If one of the children becomes involved with violence, the association is that the parenting is only associated with the mother and she should have found a way to make sure that her children do not end up in criminal activities, but it cannot be just the responsibility of the women," said Wasilewska.

"Women are fantastic peacemakers, but when they are abandoned and the father is not present, it is not fair to assume that they (women) should hold the main responsibility."

She also said that efforts must be made to focus on all factors that contribute to violence in society.

"I think we hear too much in this country, and unfortunately women get too much blame for the violence in society. There are social behaviours that are problematic, but I think I hear too often that women are blamed for the violence of men because women were abandoned by the fathers of children, they are the breadwinners, the main figures in the family. But we cannot make only them responsible for violent behaviours which exist in society," she stressed.