Shaw calls for US cooperation on the ganja industry 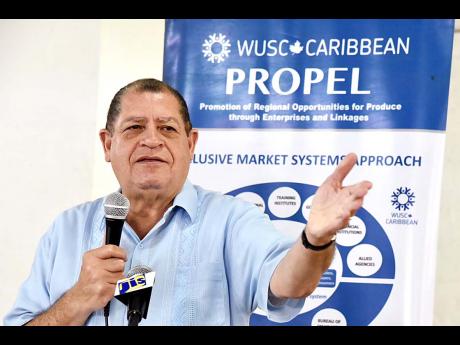 Agriculture Minister Audley Shaw yesterday said that the United States Government has an obligation to facilitate greater levels of transparency that can help small and medium-size entrepreneurs access funding to invest in medical cannabis without being affected by the issues of derisking.

Shaw, who was speaking at the CanEx Business Conference and Expo at the Montego Bay Convention Centre in St James, said that what he is asking for has global implications.

"It cannot be about a verbal war with Mr [Jefferson] Sessions and the president [Donald Trump]," said Shaw. "This one is bigger; this one has global implication. The United States has an obligation, in my view, to take a very serious and urgent look at this issue. The United States, as a leader in the world, has an obligation to help to create transparency and mobility in resources surrounding the cannabis industry."

According to the minister, all commercial banks in Jamaica are obliged to go through the New York system in terms of the movement of money internationally, based on the derisking of bank policy in the US.

"We know that there are some barriers right now. There are difficulties. We all know the issue of derisking through the United States in terms of moving money," said Shaw.

"I am encouraged by recent comments by President Trump in conversation with Senator Mitch McConnell and other US senators in which the president has specifically suggested that they are going to be obliged to take a more careful look at medicinal cannabis in the first instance."

He said that should the present condition on the movement of funds remain, the issue of the movement of money will affect Jamaica and other small countries and that the 'big boys' will find a way around that issue while others will suffer.

"I am asking you at your level in this room to do whatever you can do to help us in joining in a great lobby to the United States to say, 'The time has come for you to change your approach'," Shaw urged the international delegates attending the conference.

"Otherwise, you are going to cause problems in terms of the credible and transparent movement of money in the industry globally."