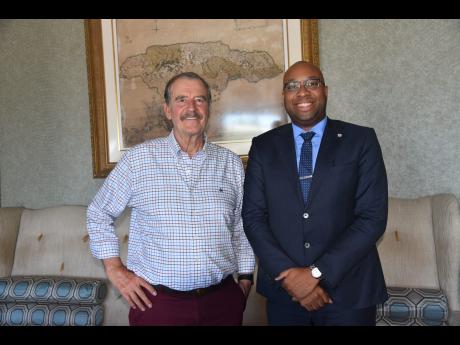 Former president of Mexico Vicente Fox Quesada is anticipating a boom in the cannabis industry after October 17, when Canada will become the first G7 nation to legalise the sale of recreational marijuana.

The move is projected to lead to $5 billion in annual sales for the Canadian marijuana industry by 2022 and Fox, who is a director at Khiron Life Sciences Corporation (KLSC), an integrated medical cannabis company, with its core operations in Colombia, is hoping that countries in the Caribbean, Latin, and Central America will relax their laws surrounding the use of the controversial product.

"I have been an activist towards legalisation for more than 10 years, and now that the cannabis industry is being legalised, people can move from being underground, being criminals disobeying the law, into businessmen, farmers or distributors, so it is a pragmatic change," said Fox, who was in Jamaica to attend the CanEx Business Conference and Expo being held at the Montego Bay Convention Centre in St James.

Fox's decade-long campaign began as a search for solutions to the ongoing problem of crime, bloodletting, and corruption in his homeland, but he is now convinced that an outright war on drugs by the Mexican government was a huge mistake.

"Maybe it was a big mistake to fight against drugs with war, with a very strong, tough government position.

"Today, I know it was a mistake because I think this pragmatic change that has come along in these late years is fantastic for taking away money from the cartels and changing the situation in Mexico," added Fox.

He is confident that Andres Manuel Lopez Obrador, Mexico's next president, will get it right and follow Canada's lead.

"It's very fortunate that Mexico has already legalised medical use, and recreation should come out any minute. It will have a strong impact on the criminal side of the cannabis plant being used by the bad hombres; it will have a big impact.

"Fortunately, this government that is coming in December is very positive to legalise marijuana for recreational use. So I am sure that by the first quarter of next year we will have everything approved."

With Canada moving ahead with both approvals, and Mexico set to do the same, Fox believes the Caribbean is next in line, but must act decisively or be left behind.

KLSC has a multi-jurisdictional strategy, with its latest being a non-binding memorandum of understanding with Fundacion Daya, Chile's leading medical cannabis institution and the holder of Chile's only medical cannabis licence.

Fox and his team are seeking similar partnerships throughout the Caribbean, a possible franchise system, and talks are ongoing with several governments in an aggressive approach.

"Khiron is becoming the number-one leading brand for the Caribbean, Latin America, Central America, Peru, and Mexico," he said.

"So this is great for you to associate with Khiron, because there you will have total guarantee and endorsement that your customers are going to be totally satisfied. My company is moving aggressively to open markets."

The former president added, "Khiron's interest is for the medical space ... so we associate prescriptions with the product and with a distribution network, a pharmacy network, so that it goes together."

With federal laws still supporting the United Nation's Conventions on Dangerous Drugs, and Jamaican banks dependent on their American counterparts for international transactions, Fox is also marketing his firm as the vehicle around this troubling issue.

"The US is taking the wrong position and liberals must come back strongly at the United States so that the industry moves ahead, but in the meantime, we have Canada," said Fox.

"There are many investment funds in Canada that are investing by the millions of US dollars in this industry and Khiro can present them and introduce them to the funds. So they can fund their industry to move from a mediocre underground economy into a healthy, transparent, strong economy."

With concessions on both sides, Fox is happy that a new North American Free Trade Agreement (NAFTA) will be signed between Mexico and the US, and he is urging the Canadian Government to also put pen to paper.

"It is my dream for the trilateral agreement to continue, because my desire is to see this new cannabis industry become a part of NAFTA ... Canada has a very important role to play in this journey," declared Fox.