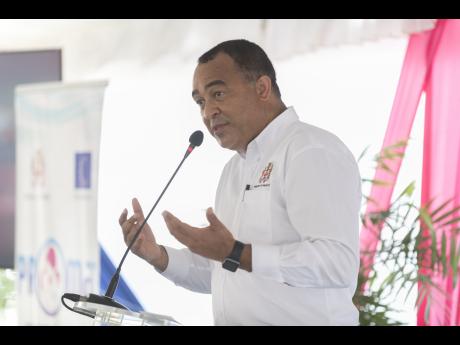 Health Minister Dr Christopher Tufton has gone to the Attorney General's Chambers for advice on how to handle disputes involving individuals and health institutions about demands for medical records.

According to Tufton, he decided to seek the legal advice following the court's ruling in the case of an infant who was hospitalised at the University Hospital of the West Indies (UHWI), whose parents were assisted by the human-rights outfit Jamaican for Justice (JFJ) to take the matter to court.

"I will be asking the attorney general to give an opinion on the specific rights of parents to the right of access of the medical records of their child or children. I will also be asking for a decision in cases where estrangement or custody is an issue. Who gets the records in that case," Tufton told The Sunday Gleaner.

"I do believe that family members should have a right, but context is important. There must be respect for patients confidentiality. In other words, if a patient insist that he or she does not want his/her estranged husband to get access to the information we would have to respect that. That's the challenge I see. Which family member has that right. But we will see what policy says and seek advice on making it easier.

The issue of who has the right to medical records was placed on the front burner in the wake of a September 17 ruling by the Supreme Court that the parents of 14-month-old critically ill 'baby Young' were to be given access to the health records within 24 hours.

The hospital had withheld the records and allegedly banned the child's father, Jason Young, from seeing the baby after he, and his wife, objected to medical students administering care to their child.

The family was also allegedly threatened with legal action, and that their child would be taken away from them and placed in the State's care if they refused treatment, as their consent was mandatory.

They family also alleged that the hospital withheld information from them about the dangers of the treatment being proposed.

According to JFJ, "The infant daughter of Mr and Mrs Young was admitted to UHWI on August, 22, 2018. On August 24, Mrs Young was advised by a doctor that the child would certainly die within two days because the hospital could do nothing to save her life. At that point, medical treatment from UHWI ceased, according to the family."

The human-rights body said the doctor's medical judgement proved to be incorrect as the infant lived beyond the August 26, despite not being treated by the medical staff.

In an affidavit, the parents stated that they did not want to engage the procedure unless they received some basic information that the procedure was necessary and it was the only proper course of treatment to give the child a fighting chance at survival.

"We requested full information to allow us to give informed consent. We were told by UHWI medical staff that we are to simply sign the relevant consent papers," the affidavit said.

They alleged that their attempt to get a second medical opinion drew resistance from UHWI, which took a series of unlawful and unfortunate acts.

The hospital also sought relief from the court, and last Thursday received the approval to treat the child using prescribed procedures and drugs, including chemotherapy.