Tears, cash for Yetanya - Reward for information on teenager's killers now at $500,000 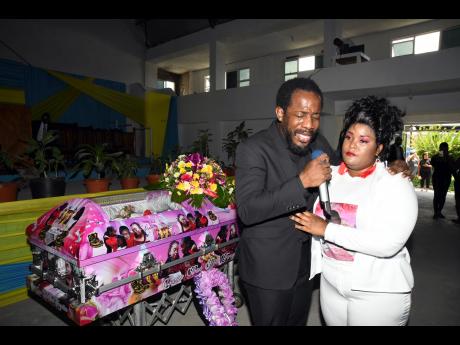 Norman Grindley
Entertainer Wayne Marshall (left) gets a hug from Latoya Riley, mother of Yetanya Francis, after he ended his attempt to deliver his latest hit, 'Glory To God', during a thanksgiving service for the life of the slain teenager at the Half-Way Tree Seventh-day Adventist Church in St Andrew, yesterday.

The pain was as raw yesterday as it was almost 40 days ago when the burnt body of 14-year-old Yetanya Francis was found metres from her house in Trench Town, St Andrew.

This time, the emotions flowed inside the Half-Way Tree Seventh-day Adventist Church in St Andrew, where a thanksgiving service was held for the life of the teenager.

As family and friends openly wept, entertainer Wayne Marshall added his tears as he failed to complete a musical tribute to the former Kingston Technical High School student.

"My condolences go out to the family. I lost my father earlier this year and when I saw Yetanya's story, it was as if it were my sister or my cousin. I am just cut up by it," said Marshall.

The hurt of the mourners was compounded by the failure of the police to identify and arrest Yetanya's killer, or killers, and the silence of those who might have information on the crime.

Mark Golding, member of parliament for the St Andrew South constituency, which includes Trench Town, noted that the reward for credible information which leads to a breakthrough in the case is increasing.

"I initiated the Crime Stop reward that is being offered for information that leads to the arrest of wrongdoers who lay behind this act. The reward has gone over $500,000 at this time. Weeks have passed and still the police say they have no clear evidence that can lead to an arrest," Golding told the mourners during the service.

"I see it important to say yet again, that as a community, we owe it to Yetanya and the family, to find courage in order to bring justice. This is not the time for cowardice.

"This is a time for courage. Jamaica cannot achieve the greatness, which is our destiny, if citizens do not show courage to provide information on these kinds of terrible wrongs," added Golding

Assistant Commissioner of Police, with responsibility for Area Four, Devon Watkis, also pleaded for information on the killers.

"We are still seeking information to complete the follow-up that we have been doing in terms of leads and indicators. However, investigators have not drawn firm conclusions," said Watkis.

The Kingston Technical family used a dance and presentations in Spanish to pay their final respect to the schoolmate they called 'Princess', who was performing well academically while engaged in netball and cheerleading.