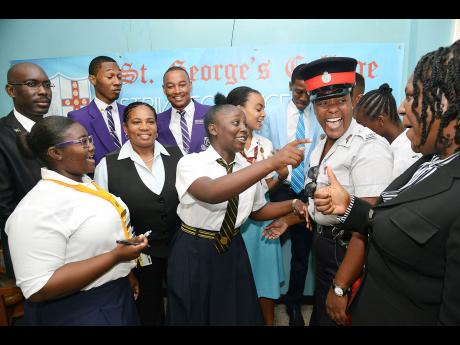 Terrified students who attend schools within the Kingston Central region can soon breathe easier, as the relevant authorities are moving quickly to protect them from robberies, as well as sexual and physical assaults on the streets.

Student leaders and principals from eight Kingston high schools yesterday converged at St George's College on North Street to urgently address safety concerns and find solutions to protect the youth while travelling. The meeting was prompted by a recent spate of robberies and other serious offences against students in the capital city.

The introduction of covert security personnel, especially along the North Street corridor, is one of the methods that will be employed.

"A number of situations are occurring. A lot of them are issues with students being affected by violence outside school compound. We in the ministry have been looking at how we can assist temporarily in the coming weeks," said Coleridge Minto, director of safety and security in schools in the education ministry.

"We are considering having private security support the police. We have received assurance that we will be having dedicated police patrols within the area for affected schools. Students must take authorised public transportation. I believe that all schools in this area should have a safety and security committee set up. We are working with principals to ensure these committees are in place, along with a critical incident management committee."

Ivel Calder, deputy super-intendent of police in charge of territorial operations at the Kingston Central Police Division, told The Gleaner yesterday that members of the police's Criminal Investigations Branch (CIB) will begin carrying out covert operations within the area.

"Having recognised an increase in reports of violence against youth, the management team of the division sat down and charted a way forward. We have asked CIB to give us a covert presence whilst [regular police] will actively try and prevent anything happening," she said.

"It is better for us to prevent, than it is for us to investigate. The children must also understand that they have a responsibility. Your phones are usually the target of robbery or assault. Don't walk with them exposed."

ASKING COMMUNITIES TO BE OUR PARENTS

Kingston College's sixth-former and Students' Council president Tyreese Ingram made an appeal for all perpetrators of violence against children to desist from doing so.

One major problem pointed out by principal of St George's College, Margaret Campbell, was that girls were also scared of being sexually assaulted on the streets.

"In bringing the students together, I must admit that one issue I had not thought of, which is the struggle the girls go through. The girls said they are afraid of being manhandled by some of the men on the streets, or being kidnapped," Campbell shared.

"A few of them have shared stories that would horrify any parent or school administrator. There are stories of girls actually being lured and encouraged into vehicles while on the streets. One girl shared that a man touched her inappropriately, but luckily a teacher was there to put a stop to it. It is a fact that our girls are not particularly safe when they make their way to school and back home."