Wheatley's assistant was a signing officer for NESol's cheques 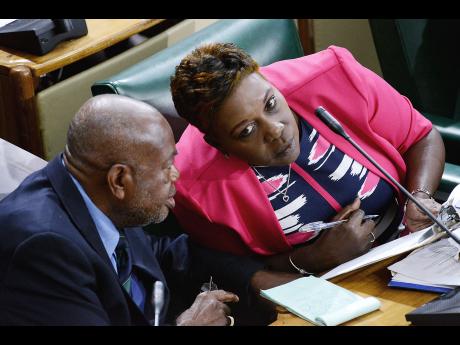 Sophia Deer, an assistant to former Energy, Science and Technology Minister Andrew Wheatley, and a director on the board of National Energy Solutions Limited (NESol), was a signatory for cheques to contractors for work done on behalf of the agency.

Parliament's Public Adminis-tration and Appropriations Committee (PAAC) member Phillip Paulwell yesterday continued his probe of NESol, one of several entities under the ministry that has been accused of nepotism, cronyism, and corruption.

Carolyn Warren, the former managing director of NESol, finally got her chance to respond to questions from PAAC.

She told the committee that Anthony Brown, NESol's chief engineer who was sent on leave, was never to return as a signing officer.

"The resolution from the board at the time was to remove Mr Anthony Brown, the personnel officer and the cost accountant. When Mr Brown was going on leave, as managing director, I pointed out that we would have a problem with the signing of the cheques. And the board decided to add Mr (Laurence) Pommells as he was the one who was going to relieve Mr Brown," Warren told the meeting.

She also told the PAAC that she replaced Brown as a signing officer for NESol.

"It (Brown's removal) was not meant to be temporary," Warren said in response to Paulwell.

But it was the board's chairman, Oswald Williams, who explained the full list of signing officers.

"In Category A, you have Oswald Williams (that's me); Miss Sophia Deer, director; Miss Carolyn Warren, managing director (acting); and Miss Angela Prendergast, director of finance. We still have Mr Laurence Pommells there, but he is to be removed," Williams told the meeting.

Deer was also described as head of the human resources committee as the minister's assistant, a position neither Warren nor Williams could remember. It took chief technical director Michelle Forbes to tell the meeting that Deer was, at one point, the assistant to the then minister, Wheatley.

"As a signing officer, was he (Pommells) also involved in the approvals of payments for work done?" asked Paulwell.

"I, as managing director, have to sign all payments. If it's even a pen that is being bought, I have to approve it. The chief engineer has to approve all payments for work done. All invoices. The chief engineer doesn't, and in this case, Mr Pommells, does not approve payments for other things like purchases or utility bills or anything. Just for work done," Warren told PAAC.

Pommells' promotion to chief operations engineer was reportedly due since 2014-2015 as a result of his record of good work.

He is currently on bail on money-laundering charges.