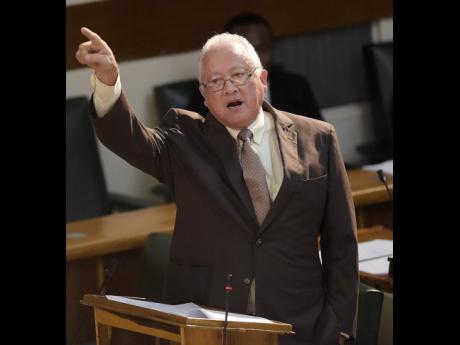 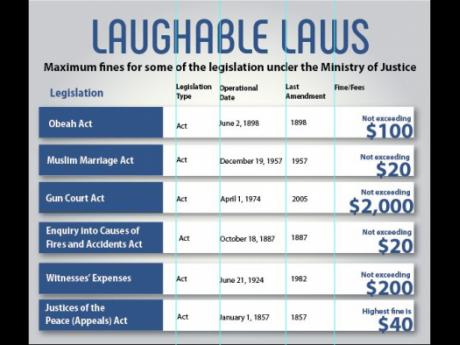 More than one year after Minister of Justice Delroy Chuck first indicated that the Government would be speedily reviewing and modernising Jamaican laws with ridiculously low fines, the justice ministry is now promising that the first set will be before Parliament this month.

According to Chuck, the revised penalties will relate to those agencies falling under the umbrella of his ministry.

He said it is expected that other ministries will table the updated versions of their revised penalties shortly after.

Last April, after Jamaica's justice system was made a laughing stock with the $100 fine handed down to reputed gang leader Tesha Miller, Chuck told The Sunday Gleaner that he would be overseeing an urgent review of the laws.

According to Chuck, he wanted a "total overhaul of this and all other such ridiculous laws on the books".

Miller pleaded guilty to making a false declaration to Jamaican immigration officials, under the Immigration Restriction Act, and with the maximum fine set at $100, the presiding judge labelled the process "embarrassing".

At that time, an angry Chuck told The Sunday Gleaner, "Since the fine was exposed, I have met with the Law Reform Unit of the Ministry of Justice and I have asked for an immediate Cabinet submission to formalise a process for all the laws of Jamaica. I want proposals for these laws to be immediately updated within weeks."

He added: "This review and submission that I am asking for is not going to be months. It's going to be weeks. We will go through all the laws, look at all the fines that have been imposed, and we intend to make proposals to the Cabinet as to how the fines should be increased.

"I will have a full discussion with the Law Reform Unit, so we can put a formal Cabinet submission within the next week or two."

With no public movement for months, Chuck would use his post-sectoral press briefing in May to repeat that many of the laws with outdated penalties would be revised and modernised.

According to Chuck, in the 2017-18 fiscal year, the ministry undertook the task of reviewing the monetary penalties of more than 800 laws.

"All the ministries have been provided with a matrix of all the laws relevant to them. Some of the fines were $40, $20 and $100. So, we have invited them to make recommendations as to what the new penalties should be," said Chuck.

"Reports have returned to us from some ministries that some of these laws can be repealed, or some sections of the laws can be repealed. In those circumstances, starting this fiscal year, we will be upgrading and improving many of the laws, and certainly, over the next year or two, we want all the laws in Jamaica to be properly updated," added Chuck.

Serious Sykes - Chief justice committed to first-world court system
See you in 2022! - Four-year waiting list for civil cases in the Supreme Court
Sectoral Presentations 2018/2019 | Justice on a roll
End delays from the Bench! - Bar Association calls on judges to speedily hand down judgments