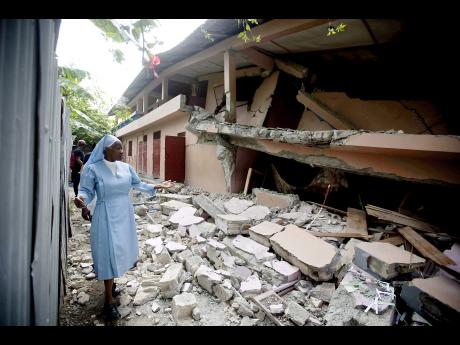 AP
Sr Maryse Alsaint walks alongside a school damaged by a magnitude 5.9 earthquake the night before, in Gros Morne, Haiti, Sunday, Oct. 7. Emergency teams worked to provide relief in Haiti on Sunday after the quake killed at least 11 people and left dozens injured.

The US Geological Survey (USGS) says a 5.2 magnitude aftershock rattled northern Haiti, a day after a 5.9 magnitude earthquake left at least 12 dead and 188 injured at the same location. The USGS says the aftershock's epicentre was located 15.8 kilometres (9.8 miles) north-northwest of Port-de-Paix and had a depth of 10 kilometres. It struck at about 3 p.m. local time on Sunday.

"It was an aftershock. It was at the same location," said Paul Caruso, geophysicist with the USGS. "This is the first significant aftershock."

At the time, emergency teams were bringing relief to victims of Saturday's quake, which toppled cinder-block homes and rickety buildings. Authorities said at least 12 people died and 188 were injured.

The government reported seven deaths in the Nord-Ouest province and four other deaths in the community of Gros-Morne in the province of Artibonite, the newspaper Le Nouvelliste quoted Secretary of State for Communications Eddy Jackson Alexis as saying.

The US Geological Survey said the quake hit at 8:11 p.m. Saturday night and was centred 12 miles (19 kilometres) northwest of Port-de-Paix, which is about 136 miles (219 kilometres) from the capital of Port-au-Prince. The quake was 7.3 miles (11.7 kilometres) below the surface.

The country's civil-protection agency issued a statement saying several people were injured and some houses were destroyed in Port-de-Paix, Gros Morne, Chansolme and Turtle Island. Among the structures damaged was the Saint-Michel church in Plaisance.

The civil-protection agency officially confirmed the deaths of at least 10 people.