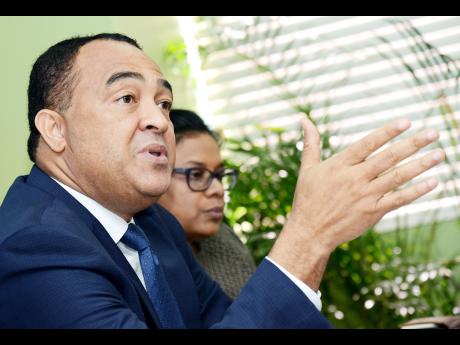 Last week, Professor Errol Morrison, honorary president of the Diabetes Association, questioned the clarity of the message during an interview on RJR's 'Beyond the Headlines'. He said he believed there should be some adjustments to the campaign, as the consumption of sugar alone does not contribute to diabetes.

The ministry has been strongly pushing for citizens to avoid overconsumption of sugary products in a bid to prevent non-communicable diseases such as diabetes and hypertension.

Tufton, at a press conference yesterday, noted that he is very comfortable with the message being disseminated, indicating that he is guided by the standards of the World Health Organization (WHO) and other regional bodies.

"We really want to get to 2.5 grams per 100 milligrams as an acceptable daily consumption. That is WHO standards. Those standards emerged out of significant research and the links between excessive consumption and the impact of health," he said.

Morrison, in an interview with The Gleaner yesterday, said while he has no intention of being confrontational, he stands by his opinion that the message must be more comprehensive.

"There's no question that what you take in, if it is in excess of what you use, will certainly lead to overweight, that is not in question," the professor said.

"We support that from the Diabetes Association [of Jamaica's] point of view, 100 per cent. When we got in the picture was that the message that was being heard was saying that these sugary drinks cause diabetes. This is what was getting across, and we said no, this is not correct," he continued.

He added, "When it comes to diabetes, to tell you the truth, we don't know the real cause of diabetes. There are a number of different contributions worldwide and it's a multifaceted contribution. I don't think we in Jamaica would look good, with that kind of advertising, without being sure that it was clearly explained that obesity could eventually lead to diabetes. It's a matter of clarity."