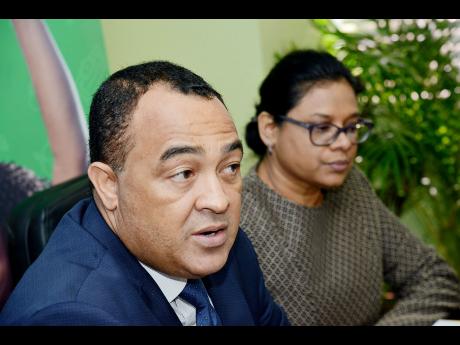 Rudolph Brown
Minister of Health Dr Christopher Tufton addresses journalists at a post United Nations high-level meeting on non-communicable diseases press conference on Monday at the offices of the ministry in New Kingston. At right is the Chief Medical Officer in the ministry, Dr. Jacqueline Bisasor-McKenzie.

Following intense campaigns against tobacco use and the consumption of sweetened beverages, Health Minister Dr Christopher Tufton said the next focus will be on reducing the intake of trans fat and sodium.

"Our health and lifestyle survey showed that one in three Jamaicans are hypertensive, and so those two areas are areas that, over time, will get greater attention as part of the preventative measures, and again is in keeping with the global thrust to look at diet as part of the holistic approach to dealing with health and wellness," he noted.

Tufton was speaking at a post-United Nations (UN) high-level meeting on non-communicable diseases (NCDs) at the Ministry of Health's New Kingston headquarters on Monday. The minister was one of several global leaders at the 73rd Session of the United Nations General Assembly in New York City, United States, recently.

The minister noted that Jamaica was part of a global community and, therefore, subscribed to a global agenda on public health. It was revealed during the UN meeting that Canada has already placed a ban on industrial trans fat.

"It is obvious that they are moving ahead, and we can learn from them," he said.

The most recent UN high-level meeting was the third one to focus on NCDs, which many agree is a crisis that is linked to poor lifestyle choices. There have been several campaigns aimed at getting people to change their lifestyles and make adjustments to their diet.

"Sugar has been the latest, but there has been a major thrust again, speaking to the preventive side to look at trans fat," Tufton said.