Nanny was real, not a myth - Gov't conferred Order of National Hero on Nanny in 1976 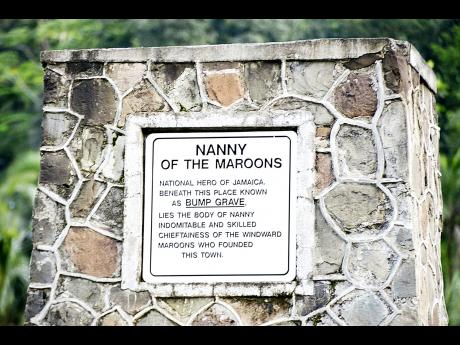 Despite her national heroine status, some people still are convinced that Queen Nanny, the legendary Windward Maroon leader, was a myth, a figment of some historians' overactive imagination. And the fact that the image that represents her is not hers has fuelled the mythology.

Yes, there are fabulous folklore and fantastic tales, stuff that legends are made of, about her. The stories of her indomitable spirit and exploits are many. Her undaunted mettle and iron fortitude made her catch bullets with her backside, one story goes. She was said to have supernatural powers that drove fear into the heart of the British.

But myths apart, Nanny was a live and breathing woman who fought alongside Captain Quao in a protracted war that led to the signing of the treaty of peace and friendship between the British and the Windwards Maroon in 1739, one hundred years before Emancipation. The treaty was signed on behalf of the Windward Maroons by Captain Quao as Nanny refused to have anything to do with it.

It is true that not much is known about her familial origin and when she would have arrived in Jamaica. She is said to have come from the Ashanti people in Ghana. It is also conjectured that she did not come to Jamaica as an enslaved African, but one who came over a free woman to see what was happening to her people.

Some of her people were in bondage, others, the Maroons, had set up camps in the hills, where they were pursued by men in thick, red coats. Nanny joined the ones in the mountains. Together, they employed guerilla war strategies to wear down the resolve of the hapless British.

Nanny and Captain Quao had some major disagreements, especially when Quao allowed the British to enter their camp with peace overtures. She regarded the signing of the treaty as a manifestation of weakness, especially since it was based mainly on the terms of the British.

Yet one year later, Nanny and her people were granted 500 acres of land by the Government. The land patent, a copy of which is stored in the national archives at Spanish Town, St Catherine, is listed as "Land Patent to Nanny, 1740, Patent Vol. 22, Folio 15B.

The process to elevate her to the status of national heroine was initiated by the late senator and educator Maroon Colonel C. L. .G Harris of the Moore Town Maroons. Colonel Harris' forceful presentations in the Senate in the 1970s led then Prime Minister Michael Manley to order cultural and historical research on Nanny of the Maroons, spearheaded by Professor Kamau Brathwaite, then a reader at The University of the West Indies, Mona.

Brathwaite's findings were convincing, and in 1976, Grandy Nanny of the Windward Maroons became the seventh Jamaican to be conferred with the Order of National Hero.

In addressing the president of the Senate, Colonel Harris said, inter alia, "I specially would like, sir, and I think it is my duty, and a very pleasant one, to say a thank you, a very special thank you, to our prime minister for the fact that Nanny of the Maroons has been elevated to the Order of National Hero. The Maroons are truly pleased, and theirs is the desire not to be parsimonious in their expression of gratitude."