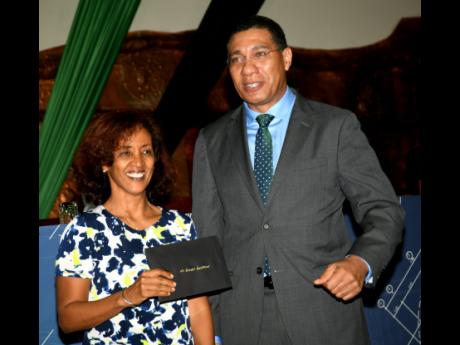 Norman Grindley
Prime Minister Andrew Holness presents a congratulatory card to Gwyneth Anderson, one of five architects who were shortlisted at the opening of the Houses of Parliament Design Exhibition at the Jamaica Conference Centre in downtown Kingston on Wednesday. 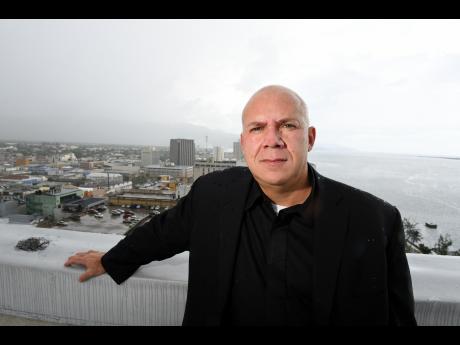 Jamaica's new Parliament building has the potential to become the country's most iconic edifice, according to the project's adviser and patron, Gordon Gill.

"This could really be Jamaica's 'Dubai' moment. I think this new Parliament building, whichever of the designs actually wins, has the potential to become significant, our own iconic building, a postcard-type edifice that captures the spirit of the people and the direction in which the country is heading," he said.

Gill, a Jamaican who leads a highly successful design and architectural firm based in Chicago in the United States also told The Gleaner that the impact that the construction may eventually have could outweigh all other major infrastructural accomplishments of the 56-year-old independent nation.

"As the patron and the adviser, that's the drum I beat. That is what this project needs to do. It needs to bring a kind of vision and attention to the skill sets and quality of Jamaicans that other countries' projects do.

"It brings to mind the Palm Islands and the Burj Khalifa in Dubai, the Eiffel Tower in Paris; France; Big Ben in London; and the White House in the US - epic construction moments like those that define a country. That's the impact that we could see from this new Parliament building, and I am delighted to be part of it," Gill said.

On Wednesday, five teams from among a total of 178 entries were selected to advance to the second phase of the Houses of Parliament Design Competition. Members of the public are being invited to view the designs at the exhibition being held at the Jamaica Conference Centre in downtown, Kingston.

Each entry has its unique features and plans, and they clearly were impressive enough to move Gill to make his assessment.

He said that the design competition shows that Jamaican architects possess the right qualities to bring an idea to life and that it could end up being a powerful way of inviting investors into the country.

"These Jamaicans came from everywhere around the world to be here. They came to recognise the five winners. That's powerful. That's a powerful moment to have all these professionals around the world in one room to congratulate and support each other. It's a massive statement and a historic process, too," Gill reasoned.