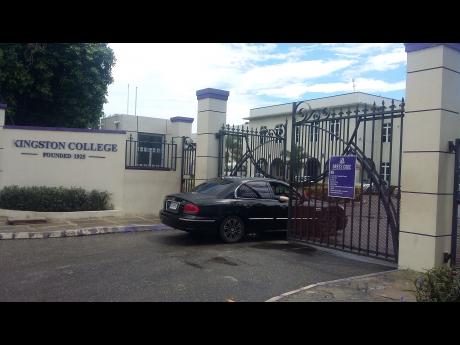 The usually cheerful Kingston College (KC) family has been mourning heavily following the deaths of at least six students and the hospitalisation and incarceration of two others in recent months.

School authorities and KC's head boy have been trying to mourn privately, offering no comments last week to The Gleaner. But the deaths have reportedly left students, teachers, parents, and even auxiliary staff questioning the heavens.

The latest casualty is fifth-former Daniel Wray, who died on Wednesday.

Police said Wray was shot and killed when he and a friend were playing with a firearm belonging to the friend's relative in Portmore Pines, St Catherine.

According to reports, Wray was shot in the head at about 3:40 p.m. The other boy has been taken into custody by cops for questioning.

"We don't know what is going on. Everybody is baffled. Teachers are taking it really bad. It is like you have your child and you lose them. Technically, they are yours. Regardless of how much trouble they give, they are yours," offered one sombre female teacher, who said that the school has been hit very hard despite counselling and prayers over the past months.

One teacher at Kingston College told The Gleaner yesterday that in recent months, the institution had lost at least one student from each grade with the exception of grade nine.

School was on mid-term holidays yesterday, but the grief was etched on the faces of the few students there. One of Wray's classmates covered his face with a towel and wept as he described the fallen Fortisan as a "brother".

"The whole of them (deaths) are hard, but the one that name Wray really shake we up more. We and him close," said one canteen staff member, tearfully.

"When he was going away Tuesday evening, he told me to leave his lunch, and yesterday, I was looking for him and didn't see him," continued the woman. "All if he is not buying any lunch he is down here. Lunchtime, when school over, him always down here. Him have manners."

As news of Wray's passing swelled the hearts of those at the school yesterday, teachers in one staffroom tried to confirm news that another student might have died earlier that morning. That was unconfirmed up to late yesterday evening.

"It is very heartbreaking because yesterday when I didn't see my son come home, I proceeded to walk out to the bus stop, and we were just there waiting. You don't know. You are just on edge, and it is just not normal for us to be going through this," said one concerned parent.