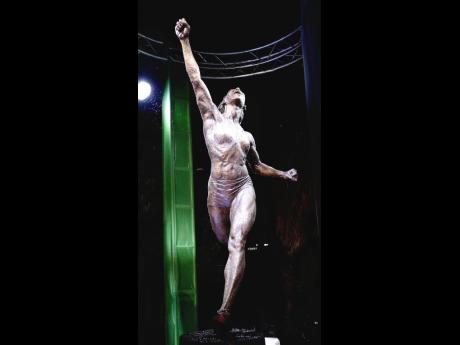 Ian Allen
The statue of Shelly-Ann Fraser-Pryce was last night unveiled inside Statue Park at the National Stadium.

With her quick dashes and sprints on the track, Shelly-Ann Fraser-Pryce has been a source of entertainment and joy for millions of people. But it was her time to smile yesterday, during the unveiling ceremony of a statue in her honour.

Members of the athletics and entertainment world, alongside politicians and foreign dignitaries, gathered inside Statue Park at the National Stadium in St Andrew to show support for the ‘Pocket Rocket’, despite heavy rain.

Minister of Sports Olivia Grange told the gathering that Fraser-Pryce has played a significant role in ensuring Brand Jamaica shines brightly for the world.

“It is with immense pleasure that we pay maximum respect to the young woman who has caused us on many occasions to experience joy and pride in our heritage. We stand with our ‘pocket rocket’," Grange said.

"Shelly-Ann has radiated confidence that lit up the hearts of every Jamaican, causing us to believe we can do it. She has become a model for young girls across Jamaica. She is a one of our modern-day heroes.”

Reflecting on Fraser-Pryce’s greatness, which she achieved from very humble beginnings, Prime Minister Andrew Holness, who unveiled the statue, described the star as “little but tallawah”.

However, the world might not have been praising Fraser-Pryce the way it is now, if a decision was made in 2008 to put another athlete in her place at the Olympics because, even though she won at the National Trials, it was believed by some that she was too inexperienced.

Bruce James, president of the MVP Track Club, with which Fraser-Pryce won all her titles under the guidance of coach Stephen Francis, lauded Fraser for her humbleness.

“I remember the National Championships which was used to choose the 2008 Olympic team, when we had Veronica Campbell Brown, Sherone Simpson and Kerron Stewart, who was the fastest in 2008. How was Shelly-Ann, who was running 11.3 seconds in the 100m, going to make that Olympic team. History would have it that Shelly-Ann made that Olympic team and went on to win the gold medal at the Olympics. I share that because, when people say she is humble, we know it is true because she proved it as a little girl.”